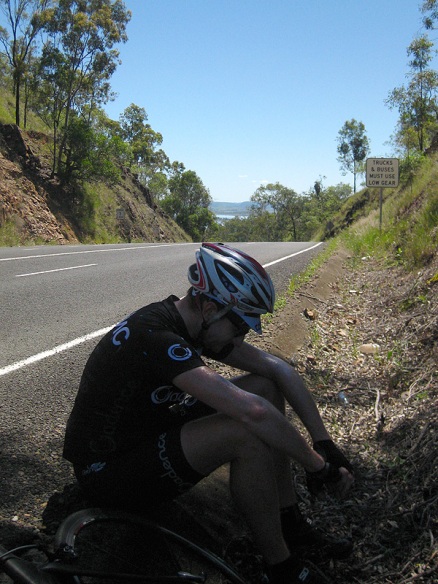 The picture above is me at my very lowest. It is not quite the heart of the pain cave, cause that would be just a few moments before as I slogged up this shitty little hill that just kept giving. Scotty took this photo. I handed him the camera and I said, I need to document this pathetic low. He did a good job. The dam is in the background, way down in the background, I am all dark and solemn, head down, DEFEATED and then there’s that sign on the right – documenting just what we had just come UP.

At this point the temperature was at it’s peak (certainly in the early 30s), my legs had just begrudgingly allowed me 1800 metres of altitude and my stomach was at it’s emptyessness, screaming at me for more sustenance. I was in all sorts of pain and I was seriously thinking I needed rescue. RESCUE. So this is the story of how I got there and what happened after.

The ride started at roughly 8:30. It was me, Tom and Scott and we did a little shortcut over the back of Coot-tha to hit Waterworks Road at St John’s Wood. The hills so far through Bardon and Heartbreak Hill on the way past Coot-tha on this new race gearing were a bit rough – me being used to super-granny gears of a compact crankset – but I thought I’d ride conservatively and try not to give my legs too much heartache. 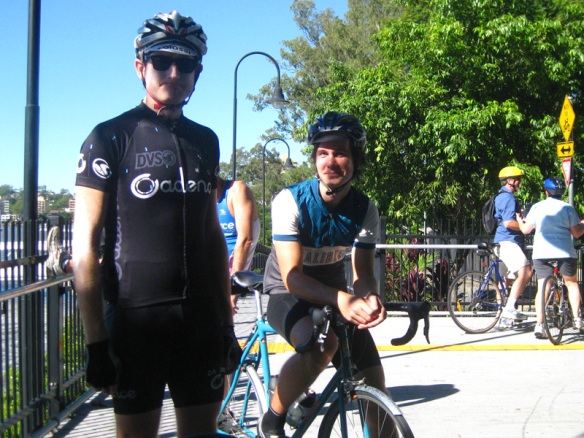 The ride up to Nebo took about 55 minutes (no record – but not such a bad effort) and we stopped at the school for water and a chocolate bar. Next was Mt Glorious which saw Tom and Scott speed ahead. I stuck to a rhythm and in an effort to stop my mind telling me, “Christ this is tough, Christ this is tough, Christ this tough” I started counting crank revolutions. When I got to 260 i found myself at the top. This was as far as I had ever been on this mountain – usually I would turn around here and head back to Brisbane via Samford or just back the way I had come. So I was presented with a fair bit more “up” – which I was prepared for – until the cafe near the walking tracks.

Just as I got to the top of Glorious this motorbike rider shouted at me, “Get a car.” I was like, “Um, what?” Dude – I made it to the top! What good is a car to me now? And he was on a motorbike telling someone to get a car. DOUCHECANOE – as Scott would say!

Anyway, at the cafe – like triplets, – we each had a muffin, some coffee and a coke. Just as we were about to leave I rode back down the road to take this photo of a weird house I saw. As I climbed back I said, “Ow.” and Scott was like, “That better have been a good photo!” I said, “It wasn’t.” TRUE STORY.

When I was taking this photo some dogs started barking and I saw there was a guy on the prch. I said hello and I admired his house. He said “thanks” and I said – do you know why they built that cool tower bit of the house? He said, “I dunno.” I left it at that.

A few little pinches later and we were upon the crazy descent towards Wivenhoe. Last time Tom and Scott had been here they were with Shirts where he had melted, like literally MELTED his rims with the amount of braking he had to do. He had suddenly blown both tyres and then when he inspected the bike, both his carbon wheels had warped with the heat of such intense braking.

Then Tom (and for a bit Scott too) had to climb back up out of the valley to see what had happened. Shirts ended up having to hitchhike home.

So I was prepared for a pretty severe downhill, but I was just stunned at how crazy it was. Like “severe” is nowhere near enough of a descriptor. I was almost constantly on the brakes – the only time I let go was to give the rims a tiny break so they didn’t heat up too much and blow my tubes. There were these switchbacks with impossible gradients – maybe 20% – and after one too many of these I actually stopped to give let my rims cool down. Then I continued and a few seconds later my hands started screaming at me to give them some rest from squeezing. Luckily it stopped just when I was considering another stop, this time to let my hands fade back into recovery.

You can see from the Garmin data how serious the altitude drop was over such a short period of road.

In the Valley below (amazingly pretty and green and the road cut across this amazingly quaint creek every so often for ages) we smashed a little, gaining some respectability to the average speed. By now I was beginning to suffer and begged for a stop just as we came upon Wivenhoe for another chocolate bar (which was a muddy melted mess) and some more fluids. I am so grateful for this break as a few kms later we hit a small, but not insignificant hill. It didn’t look much at the beginning but kept surprising you after a turn. All told only about 80ms of climbing, but it really, really hurt. My mind was such a mush I couldn’t even count crank revolutions. I just kept telling myself I could do it. Tom and Scott had stopped at the top and I collapsed off the bike and just felt sorry for myself for a few minutes. I felt bad like the kinda “bad” where I thought I’d need rescue. 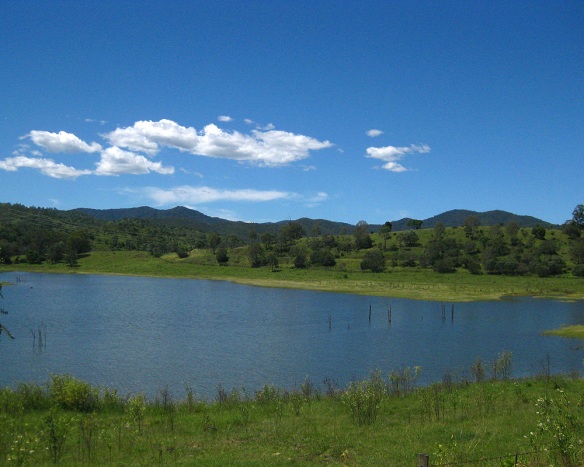 But I soldiered on and luckily it wasn’t too much hilly nonsense into Fernvale. I was buoyed by the fact that I had a new appreciation for this country – it being where the “Piepers” had their farms – my great, great grandparents. But I was still in a great deal of pain and it didn’t help that much.

Scott had these Antarctica-ready socks on. Wha??

We spent about 40 minutes at the pie shop in Fernvale and then it was straight down the highway. Then suddenly after a bump in the road my handlebars moved downwards about 20 degrees. It made holding the hoods a little more precarious, but there was nothing I could do. The stem bolts on this new bike are star-shaped – not hexagonal, like allen keys. Stupid stem.

So then a left at Pine Mountain road took us off the 100km/hr main road and into the country again. The scenery was great. We narrowly avoided a black snake slithering across the road just as we approached and after just one more time I made the boys stop so I could recover – we hit the outskirts of Ipswich. What followed was quite a decent smash down the hill into Brassall, then a demoralising climb out where I got a few cramps. Ow. 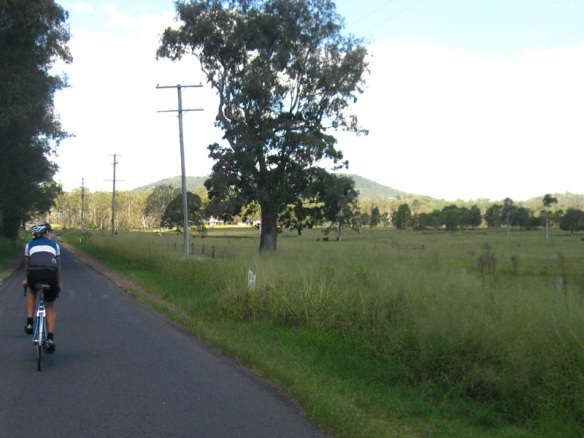 We stopped at a milk bar just 1km from the train station and I was at the counter and BANG – a massive cramp swept over me in both legs. I dropped my money on the counter, dropped my phone and just instinctively headed outside to gain some control. The bewildered shopkeeper had to have what had happened explained to her by Scott who collected my stuff and met me outside where I was now lying down flat on my back, just wiling my legs to cease this agonising drama.

I smashed a bottle of gatorade then and there – lying on my back – and felt a bit normal again after about 1 or 2 minutes. Then we headed into town and without any drama we were on the train back home.

I looked quite a mess by this stage. My jersey stained with salt and my whole body red from too much sun.

But we made it! Thanks Tom and Scotty – awesome!

OH YEAH – STATS: (these are my stats, Scott and Tom did WAY more ks!) 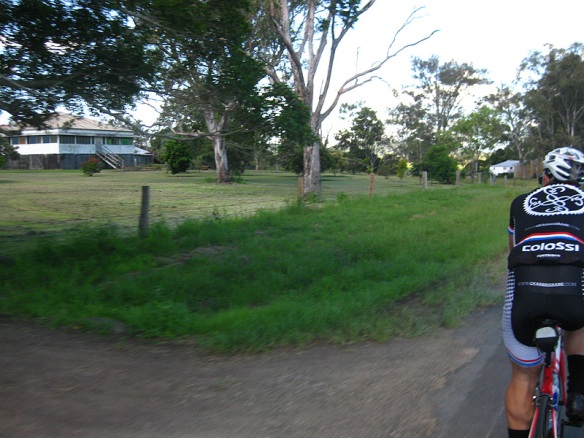 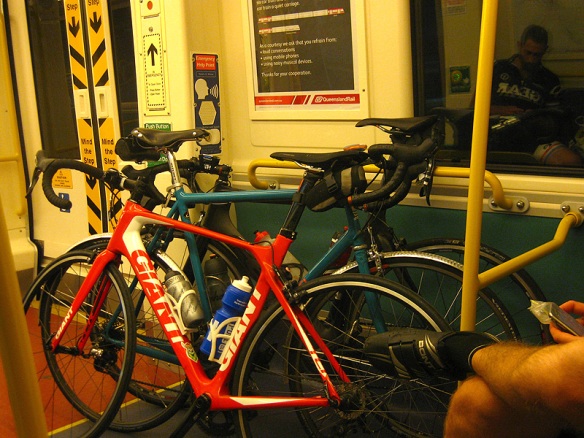