It seems my old school friend Penny is about to lose her battle with cancer.

I don’t have any photos of her, but I’ve stolen this off another school friend (hope you don’t mind Kate) and this is how I remember her (on the right): 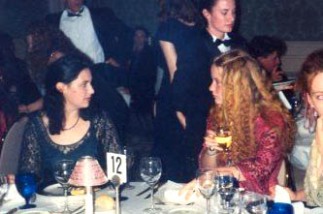 I first met Penny when I moved to Sydney in year 6. She was this tall — almost amazonian ranga — with long straight hair and she was tough and she had a deep, Janis Joplin voice. She looked (and acted) a bit like Jodie Foster. She was always laughing and being a bit of a prankster. I am pretty sure she played Magenta in our end-of-year school performance of the Time Warp. She was the biggest fan and pretty much made the decision on behalf of our class that we were doing something from Rocky Horror.

I’d never even heard of the Rocky Horror Picture Show before I moved to Sydney but then suddenly I was going to see the stage musical with Marcus Graham as Frank’n’furter in the city. I loved it.

Penny used to tease me about how when I smiled my top lip disappeared. And she was dead right. I can’t help noticing it still.

Penny was worldly. She grew up fast. As a kid I was horrified at what she was into (nothing serious) – while I was reading comic books and drinking coke thinking that was tough.

After primary school she disappeared over to Randwick Girls High but I’d still see her at the Taylor’s Square bus stop every so often.

Then she came to Sydney Girls – I think in year 9. When Paul and I had a joint birthday party we decided to invite girls. The only problem was, except for Els (who was a family friend), we didn’t know any.

But then I asked Penny to come and she brought some of her friends. So it was like 15 guys and 4 girls. She had a great time I am pretty sure.

Her younger brother Cameron tragically died just a little while later and it was the first funeral I’d ever been to. I remember Penny giving me a big half-smiling, half-crying hug as she greeted me at the church gates.

The next, and last time, I saw Penny (or “Penni” as she wanted to be known as back then) was randomly at a party in Brisbane. We’d had no idea we’d been living in the same city for years. We chatted for a hour or so and swore to keep in touch. But apart from exchanging a few emails, we lost track of each other again. That is, until the facebook era.

And so a few months ago, maybe a year, I sort of got the impression through Facebook feeds that she was sick. After my trip to Sydney last year I wrote to her to see how she was but she didn’t get back to me but I am sure she had other things to worry about and occupy her time.

I’ve never had to say goodbye to someone like this before. The longest goodbye.

You are amazing Penny. I’m really privileged to know you. I will miss you.