I was pretty anxious all day yesterday.

It wasn’t just the anticipation of the race that evening, it was worrying about everything that could go wrong. And then there was the rain. I am getting used to the fact that every time I run an alleycat it rains. But the rain yesterday was cruel. It would shower, then brilliant blue skies would pop out and things would dry up. But then it would suddenly piss down again.

To kill time and keep busy I went for a walk, hoping a stroll wouldn’t affect my legs. Then I had a meal at about 4 and couldn’t take just sitting around anymore so I went for a 15 km roll, warming up I guess.

I arrived at the race start in Orleigh Park quite early but it wasn’t too long before Shirts pulled up on his TT bike – looking the business. Tegan and Dee were next to show – being the race officials. 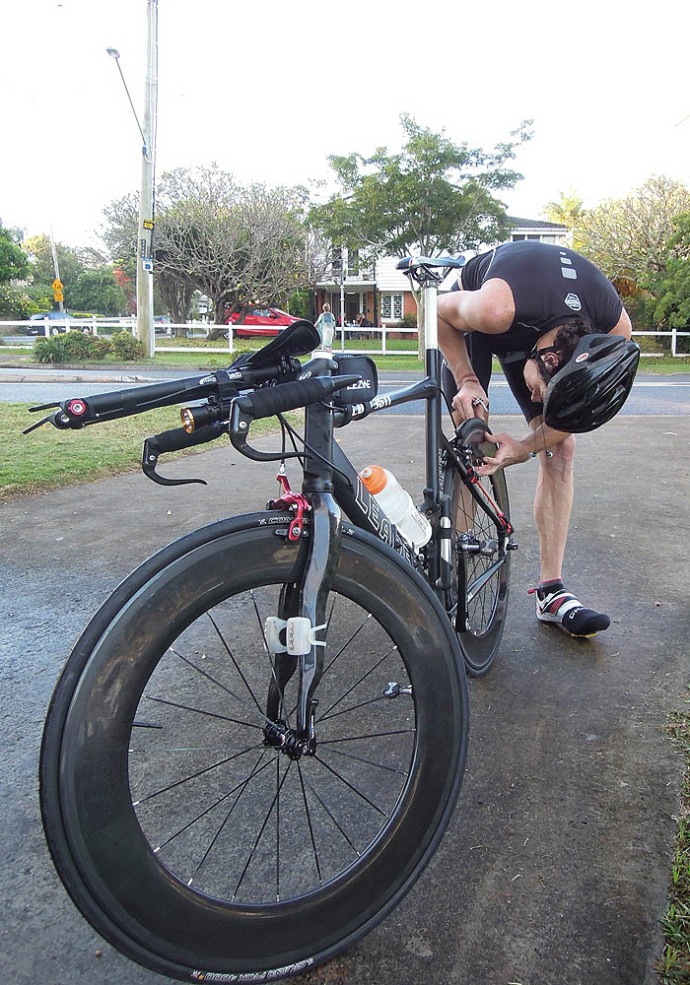 Then riders and checkpoint personnel started trickling in. At one point Tegan joked we had more people on checkpoints than riders – but thankfully we got a few more punters. 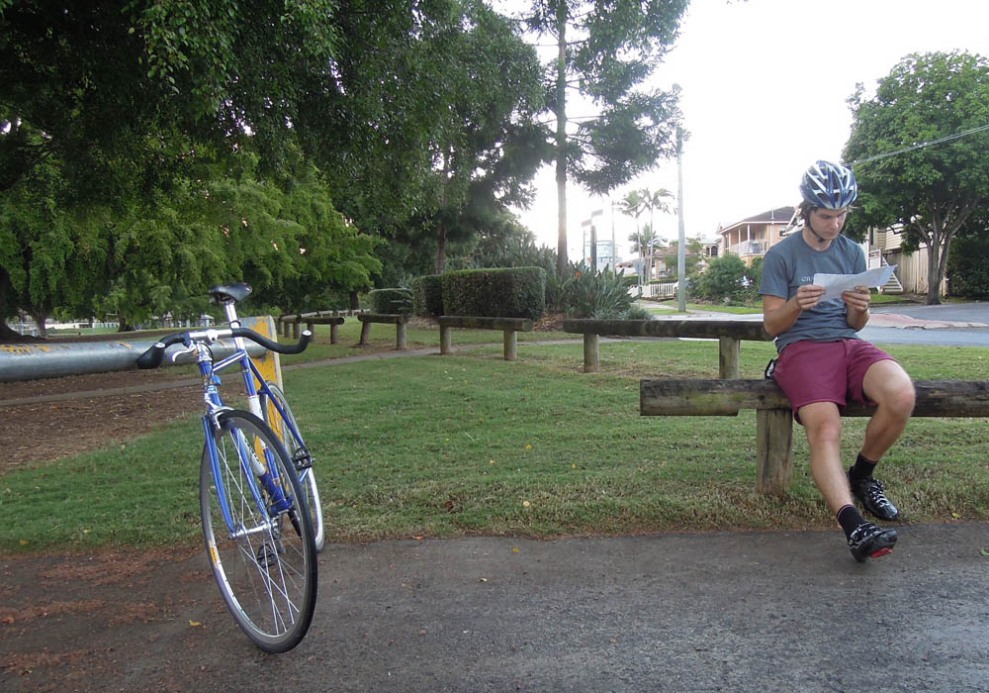 So – as well as Shirts and me there was Tom, Ryan, Jesse, Eddie, Costa, Dougie, Scott and Paul. Scotty arrived in style half hanging out the window of a taxi. (Jordie was running late and had to start after everyone else had gone.) 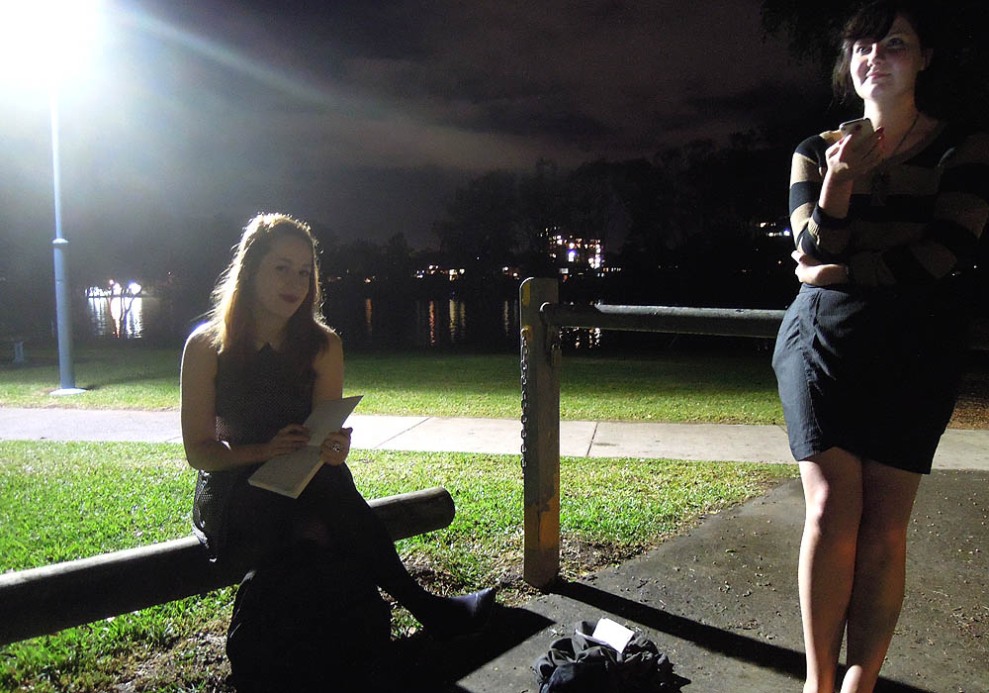 And then, just as it got dark, we were racing. I was the 4th rider out. I tried my best not to start too hard, but I knew I had to be in pain the whole time. It was just deciding what level of pain I could sustain for the next 50 odd minutes. The pros will tell you that to be successful in a time-trial you need to grind at a consistent level. No surging, no crescendo – just a smooth, but agonizing smash. The trouble was I didn’t really know what my specific level of intensity was. And plus there was those two ugly hills right at the end. Tricky.

On Montague I got slowed by a red light and had to crawl around the cars banked up and on the Bicentennial bikepath I had to brake to get around an old dude on a mountain bike and I started wondering if I’d fucked this ride already.

I passed Costa a bit further ahead and then got an early opportunity to jump off the bike path onto the road at Toowong. I even got to draft a car on Benson and then I saw Paul up ahead on Sir Fred Schonell. It took me ages to overtake him and I began to think I was riding pretty poorly. It was too dark to see my Garmin so I was just riding on instinct.

The night before Scotty and Shirts and I had done a gentle riverloop and they had shown me this sneaky trick of taking the wrong way around the roundabout at UQ. And this is how I got the jump on Paul. 🙂

For the rest of the race I tried to smooth out my lines, cutting corners or riding on the wrong side if necessary to gain just that tiny bit more advantage. It was pretty quiet traffic-wise so I could manage this safely. But then I’d forget and I’d do a corner and realise I could have taken a more efficient line and I’d kick myself. “Concentrate Davey!”

Under the green bridge was the first checkpoint covered by Dan and Simon who were enjoying some tasty beverages and looking quite relaxed while I was quite the opposite.

Soon after I eventually got a glimpse of my Garmin under a street light and my average speed was almost 36 so that gave me hope. I needed to average just under 35 to achieve my (quite ambitious) goal of 50 minutes. But then I remembered those hills at the end and the fact I’d be pushing a headwind in the last third.  My legs were in constant pain but my heartrate and breathing weren’t too bad. I could do this!

Near the colleges, in a particularly dark section, a deadshit pedestrian suddenly appeared on the road and I had to swing around him. Douchecanoe! I heard my phone ringing at about this point and answered it thinking it might be important – like someone had gotten into trouble in the race – but it was just my mum. “I’ll call you back!” I shouted.

After the St Lucia moguls there is a nasty pinch and I knew this would be a big indicator of how my legs were going. But I did alright.

At the tennis centre I sprinted to overtake a car cause cars can’t negotiate speed humps as good as bikes and jumped up onto the bikepath. It was really dark but I knew from the ride last night what to expect here and so could keep up the pace even though I was effectively blind.

And all this time I was wondering, “When am I gonna get overtaken?” And the answer came a few streets later in Yeronga when I sensed my bike lights were being duplicated and before I knew it Shirts blasted past. Lucky for me I didn’t have time to grab his wheel, cause if I had I would have just destroyed myself and burnt out.

Supermanlegs (Paul) and his kids were at the next checkpoint and that done I was on the Corso. I knew I had a bit left so I clicked up a gear and tried to increase the intensity. That lasted about 500 metres and the pain just got too much so I clicked down and prepared for the “Duttonberg” — that hill next to the Green Bridge. PAIN. At the top Simon and Dan had come over from their duties on the other side and Red was with them and they were cheering me on which actually gave me a bit of a lift to keep pushing and pushing.

Highgate Hill was soon summited and I did most of it out of the saddle. I knew if I got to the top here without getting overtaken, I was a 99% chance of holding off anyone trying to overtake me. I looked back and there was no one there. Safe! Down Dornoch there was no coasting…just grinding in the biggest gear I had. A taxi pulled out without looking at the bottom but the braking I had to do didn’t hurt that much as the finish was so close and I could afford to bury myself to sprint back up to speed. Out of the saddle mashing for the last 250 metres was tough but at least it was over.

It was a few minutes before another bike came in and that was the first indication that I might have done ok. So then bikes came in every few minutes and we were soon all swapping stories and slapping each other on the back. Costa was the last one in having got a bit lost. Scotty arrived carrying his bike – a puncture on Corro Dirve ruining his race and Jordie got dropped off by a car. He explained his chain had broke as he was smashing up that hill in St Lucia sending him over the handlebars and a passing motorist had stopped and offered him a lift all the way back!

Also of note – Scott didn’t connect his rear disc properly and so had a bit of a fail when he tried to launch off. Poor Scotty! A tough night for him.

So Tegan and Dee started calculating the results. They had to determine my time by my average speed cause they didn’t realise it was me when I got to the finish. As it turns out the time they awarded me (51:52) was only a few seconds better than what my Garmin told me once I hooked it up to the computer (51:58) and didn’t affect the placings.

So I came second! But I know Jordie and Scott would have done better than me had they not had mechanicals. 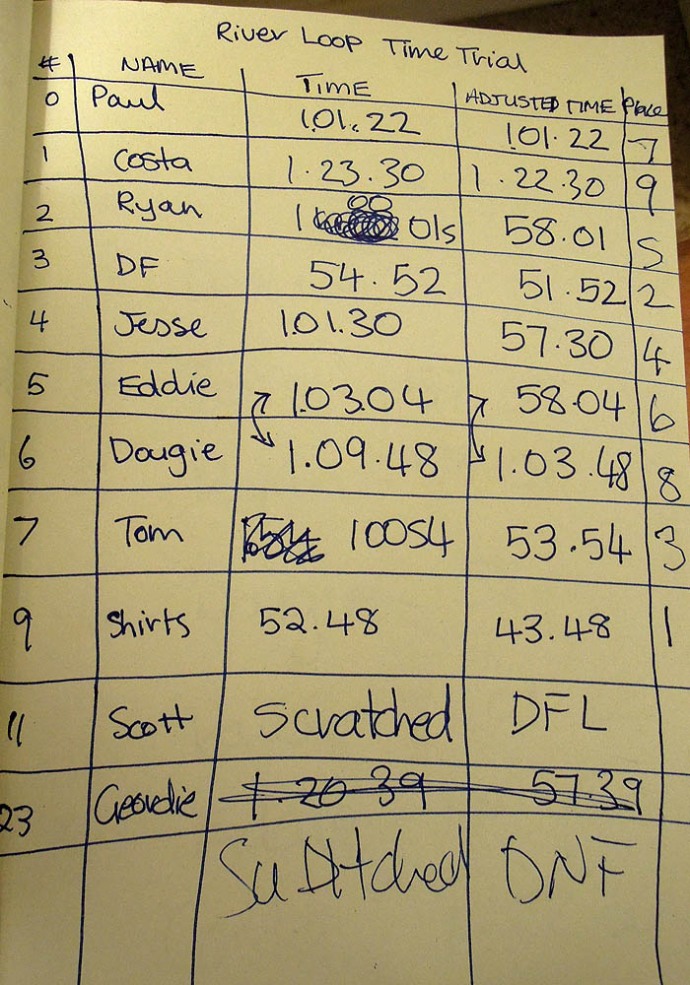 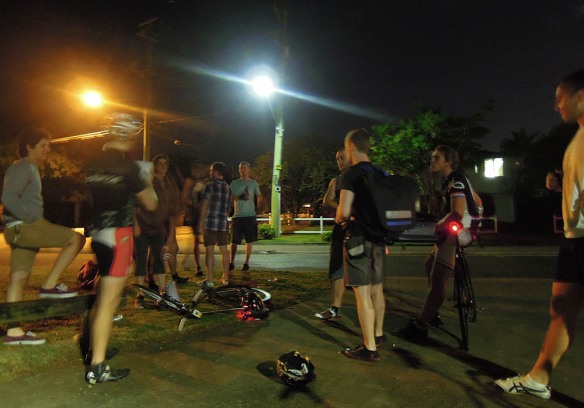 After that we had a brief stop at the Joint – then partied on at my house. Good times. Thanks everyone who came and everyone who helped out. AWESOME!

Eddie and Jessie on the way to the Joint 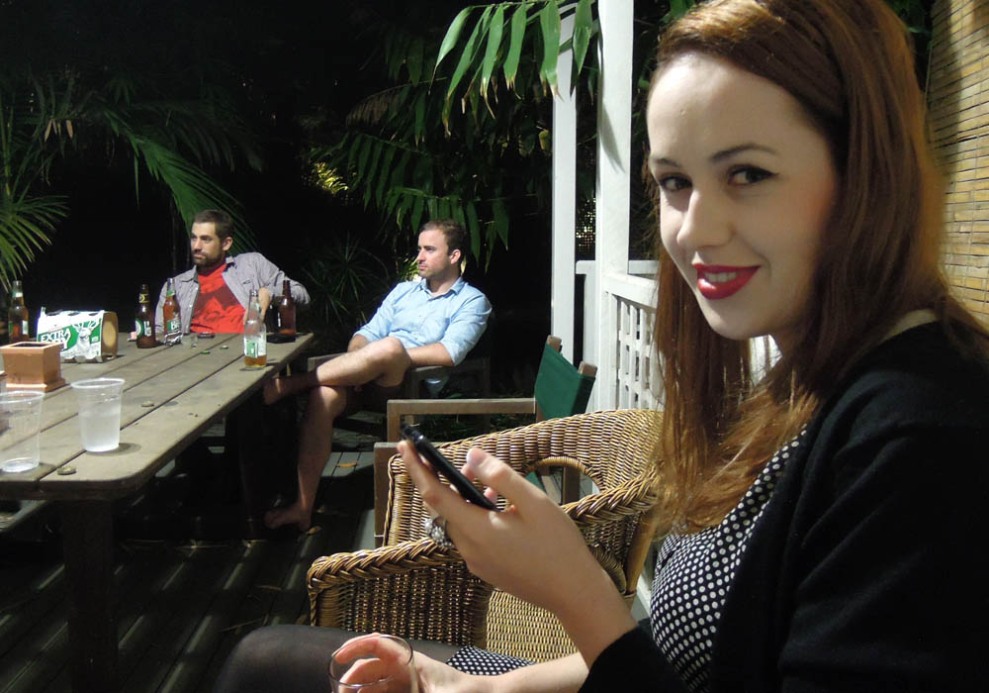