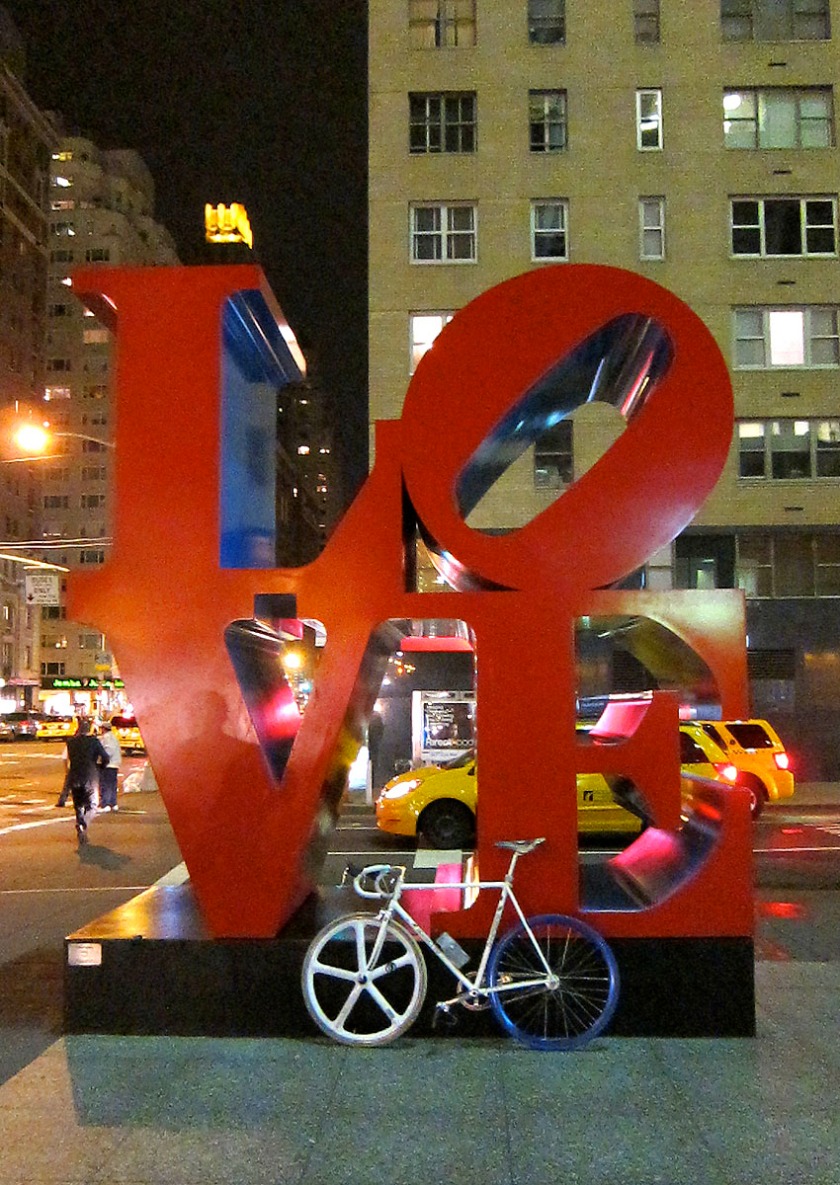 So this is the third instalment of my “bike fail” series, AKA “Crashing my bike…LOL”.

And of course through the magic of WordPress you can all see PART 1 and PART 2.

To begin this story I might just establish things by telling you all about the first bike I truly LOVED. And this bike was “The BERRETTO”. 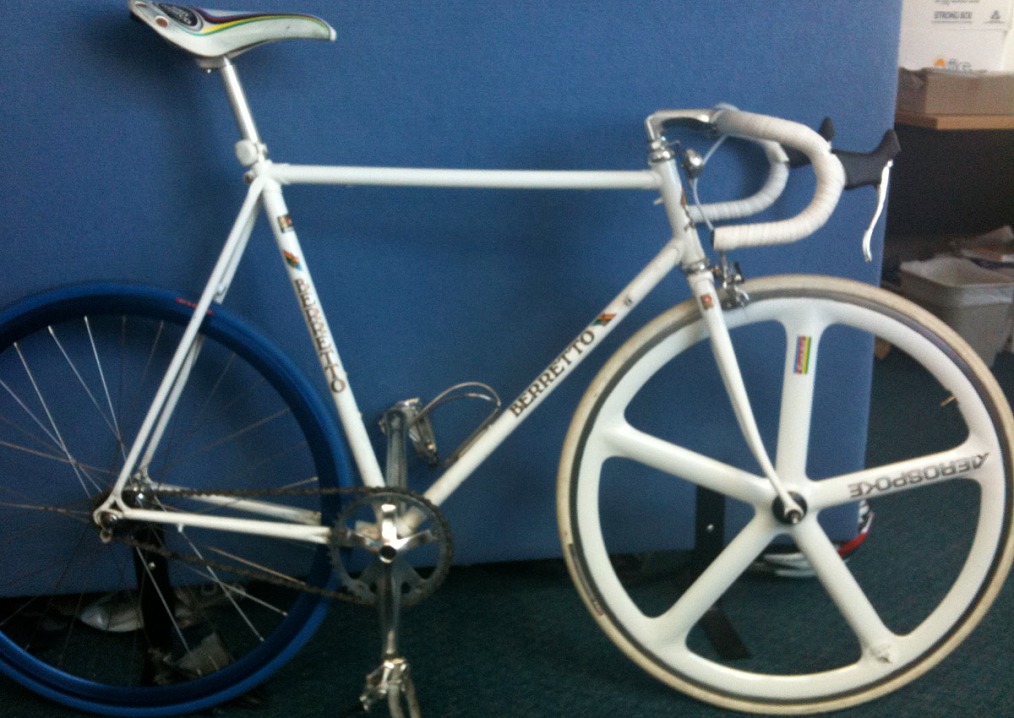 It was made in Brisbane — my hometown — by a not unknown local bike-builder called Brett Richardson — who ran a store in Chermside for a period too. And the seller of this frame told me Brett had ridden this bike too. I paid $210 for it and I thought that was an absolute bargain (and still do). 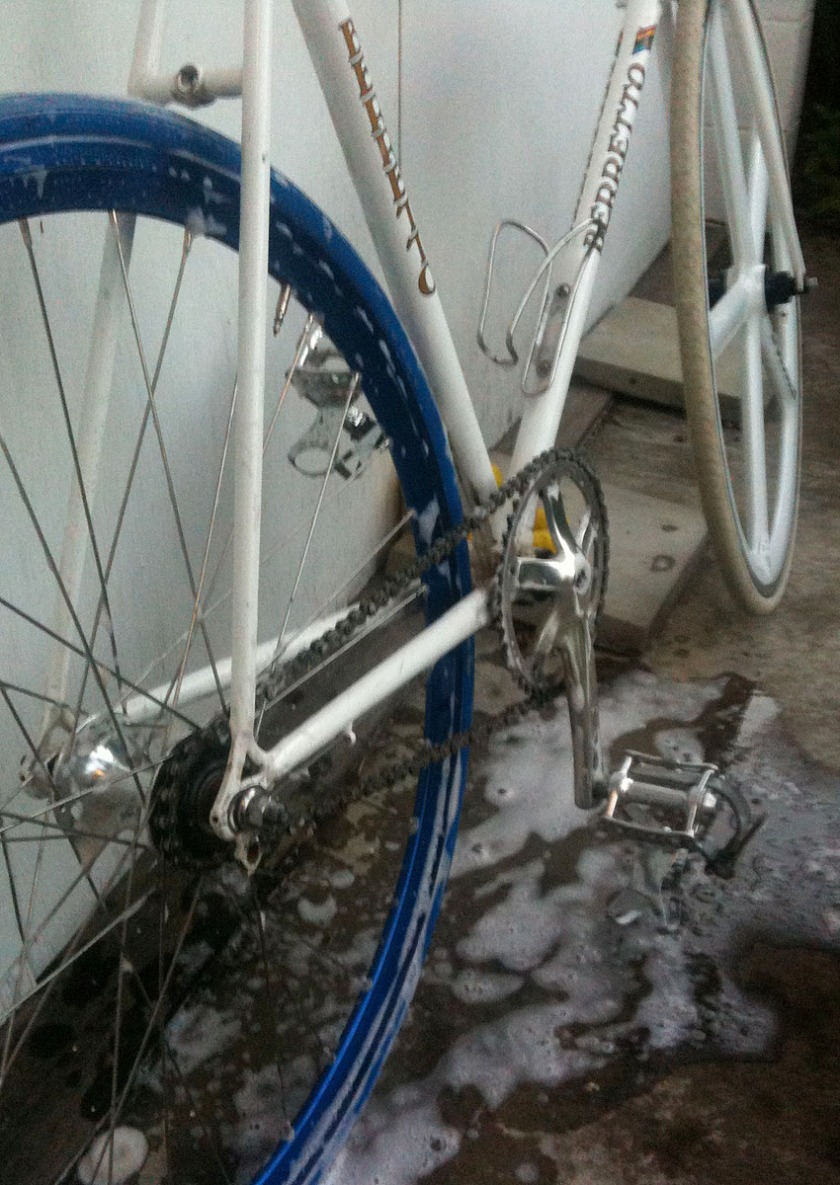 I immediately stripped my shitty 50s Malvern Star and put all the parts, wheels et al onto the Berretto. Then a few weeks later I bought it a brilliantly-white Aerospoke front wheel which was horribly lampooned by my beloved Bike Snob blogger — but I didn’t care. I loved the vibe of Japanese fixed gear where they just embraced asymmetry and my graphic designer brain loved their use of colour.

I was thus dubbed “Potato-Dave” cause I was almost the first person in Brisbane rocking an Aerospoke or “Potato” —  the name the local fixed gear scene chose to call them, half affectionately, and half in contempt.

But I was also embracing a “them and us” mentality — I was sticking it to the roadies. See in those days fixed gear riding was so frowned upon by riders of road bikes — who were all so old and conservative and reactionary. And naturally being in that state they hated us. They literally abused the fuck out of us on forums and got all gruff with us on the road.

And I guess we found that vitriol and contempt ridiculous and just played our part by being even more outrageous, even more recalcitrant — but with ever-increasing skills at the same time. When we all started doing bigger and bigger rides fixed — and I’ve done 200ks fixed — we would invariably overtake roadies on their “territory” and they would just seethe. It was like you could see the smoke puffing out of their ear holes like in cartoons. They would be melting away with fury but helpless to retaliate.

So I started riding this bike almost exclusively. My Trek roadie got shelved and dust formed on its surface. I didn’t really miss the grinding in the mountains. I figured all this grinding I did fixed was almost the same.

And my bike just accidentally got more awesome when one day I was coming from work and I smashed over that space between the footpath and the gutter and then down onto the road proper and both my tyres instantly deflated. Back at home I realised the “crabon-fibre” Aerospoke was fine but the supposedly-superiour aluminium rear wheel had a big dent in it. So I put on a blue rim from another bike, ostensibly as a quick fix until the old rim was repaired, but it all looked suddenly stupid, but so very cool at the same time. 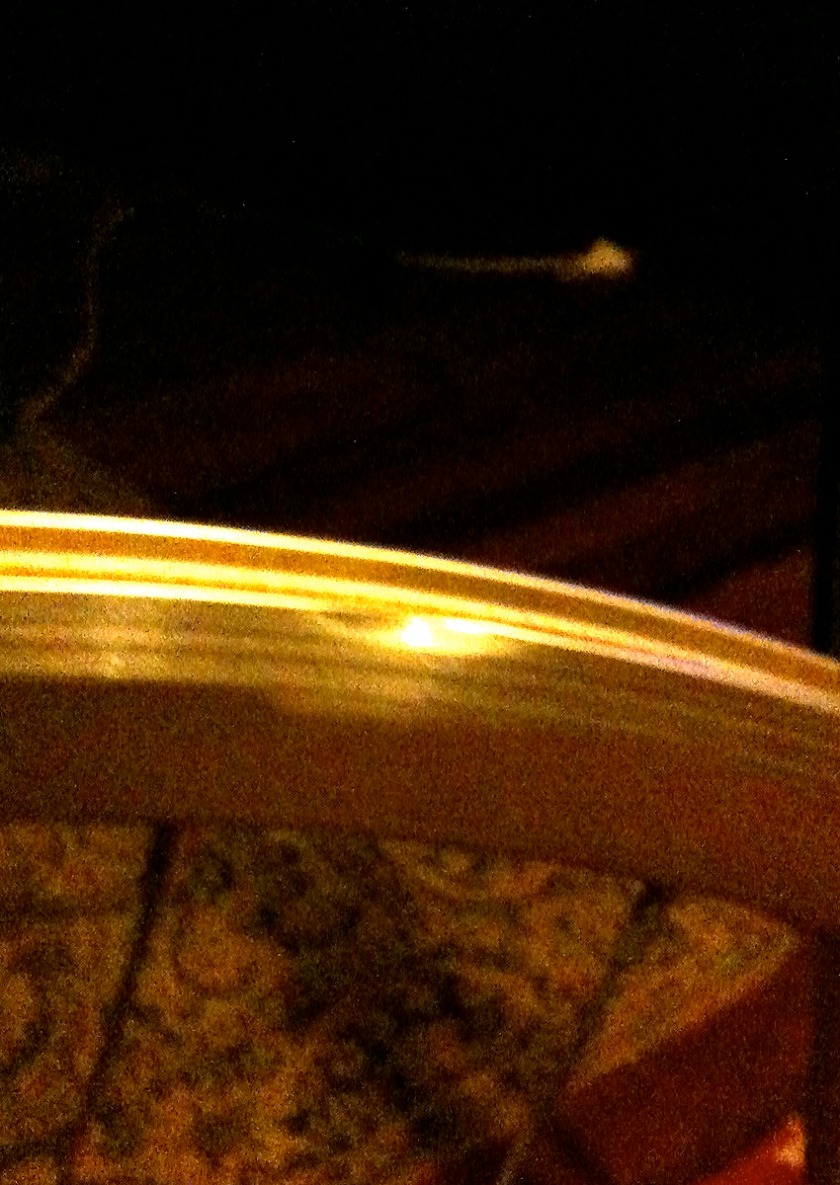 I instantly had a bike that would turn heads and I even got kids coming up to me saying, “Why have you got two different coloured wheels?”

And unbeknownst to me at the time, Brett had built the frame so it could be actually be ridden on the track — even though it had forward drop-outs and was essentially a “road-bike”. I should have realised that cause when I rode the bike I was surprised at how high the bottom bracket was and how I could lean ridiculously into corners while fixed and get no where near achieving pedal-strike. I met Brett later and we got to talk about this bike and I told him all the tales and showed him all the pics of our adventures. That was amazing — almost like Luke meeting Yoda.

The Berretto and I took the trip to New York in 2010. It was magical. I might tell you all that story another time but in the transit process it meant the bike was broken — so that’s why I can’t ride her anymore. SAD FACE. 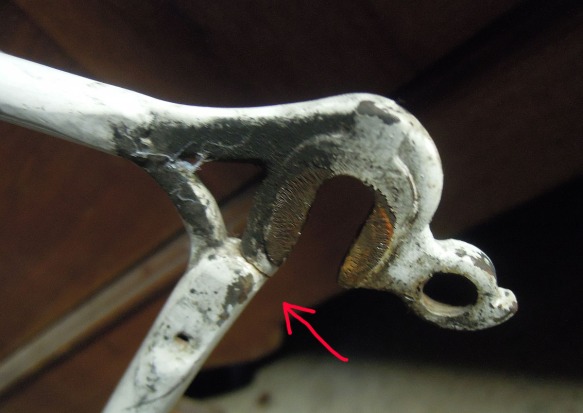 The arrow points to the crack in the steel in the right rear-drop out. If that broke off it would be another rear-wheel-falling-off story. YAY!

THE STORY OF HOW MY BACK WHEEL FELL OFF

Anyway. Sorry for all that back story. Here is the tale.

It began on my commute to work. About 5 minutes in I got a flat tyre. Although I was pretty shitty about this eventuality — I did the tube change in record time and was actually quite proud. And so I rode on to work — no big deal. And then when lunch time rolled around I grabbed the bike and rode off towards West End.

And so this is what was about to happen: I was going to push off from a busy intersection and about 3 metres later my rear wheel was going to escape from its housing and fall off. Then I was going to crash in front of a BILLION people.

It was Melbourne Street, and I was waiting for the lights at Cordelia to change. And behind me was a bus and I was conscious of the fact the road was narrow and I wanted to be ahead of that road-dreadnought. So I put a big effort into pushing off so I could smash ahead. But after that first big crank spin something felt really fucking different and then another crank spin and the whole drivetrain seemed to be disconnected and no matter what effort I put in (3rd and 4th crank turns) I wasn’t just losing momentum but things started falling apart. I was going sideways and there was nothing I could do but crash into the road — doing a stupid flip in the process — just at the other side of the intersection.

And I should say this was lunch time and it was a very busy intersection. And when I smashed into the road and my broken bike landed on top of me the list of people that witnessed this tragedy included:

1) The bus stopped right beside me and the driver opened the door as I lay there a mess of me and broken bike. Almost everyone inside the bus got out of their seats to come and look at me.

2) On the footpath an Energex worker was working inside a manhole on the footpath. At that brief moment I found myself laying on the bitumen all bloody and sad he poked his head out just 2 metres away and we were now at exactly the same head-height. We stared at eachother for a second or two (I guess it would be as surreal for him as for me) and then bizarrely he offered me his tools so I could fix my bike.

3) And of course there were a GAZILLION office workers and general pedestrians all around and they just STARED.

So what had happened was I hadn’t tightened my rear wheel bolts enough after the flat on the way to work. Bleeding and sore I managed to fix the rear wheel to the bike — this time properly and I got the fuck out of there as fast as possible. 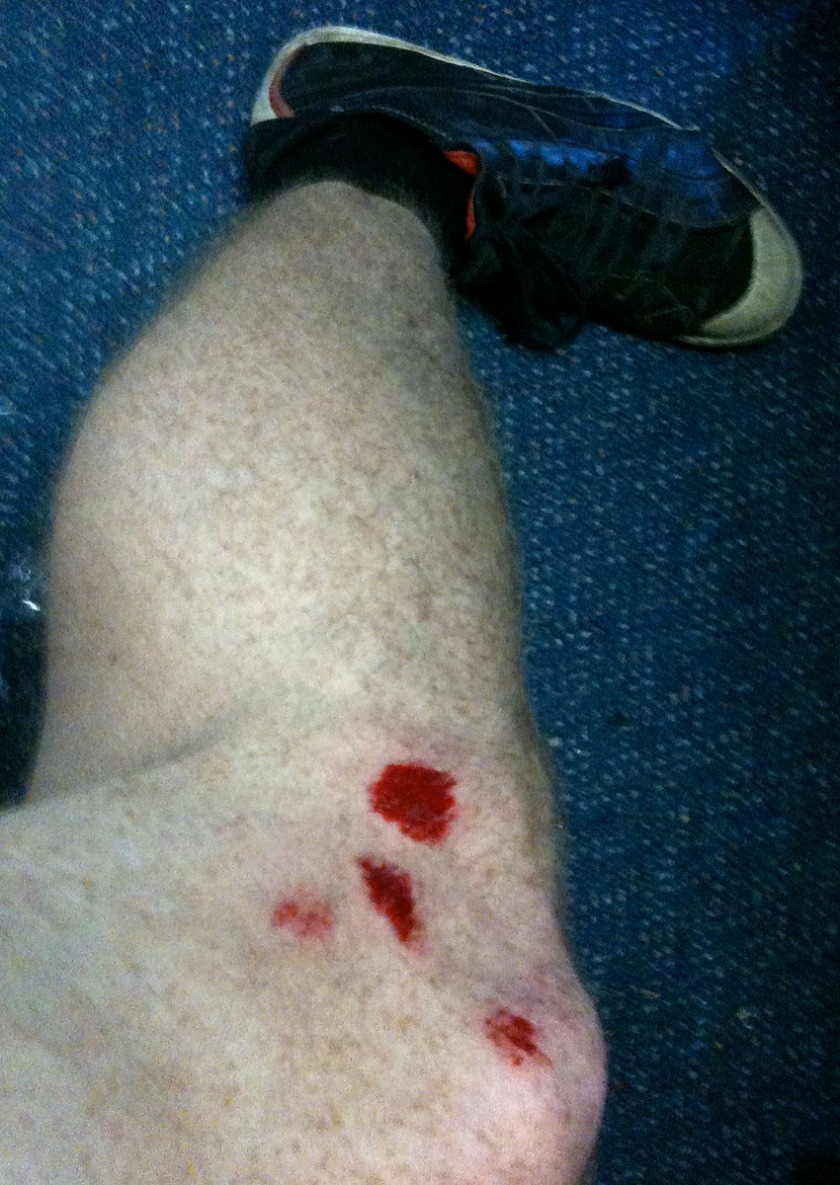 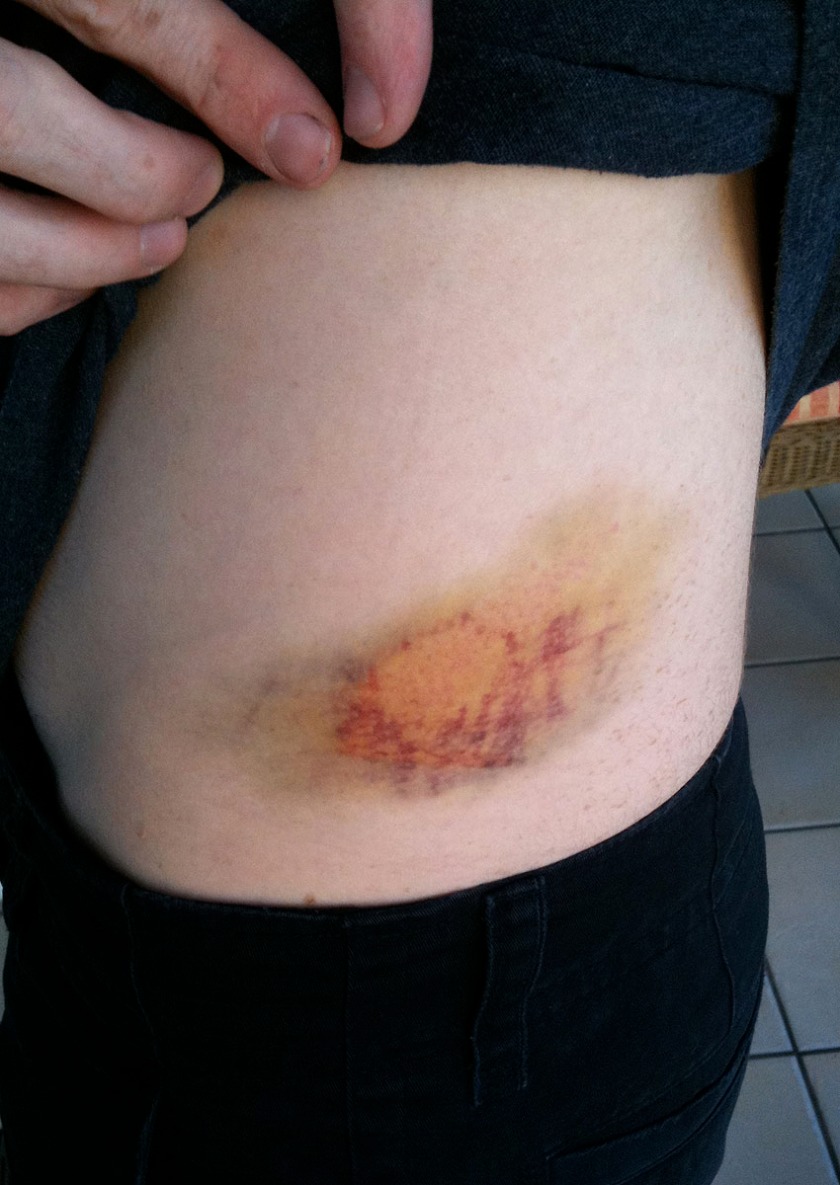 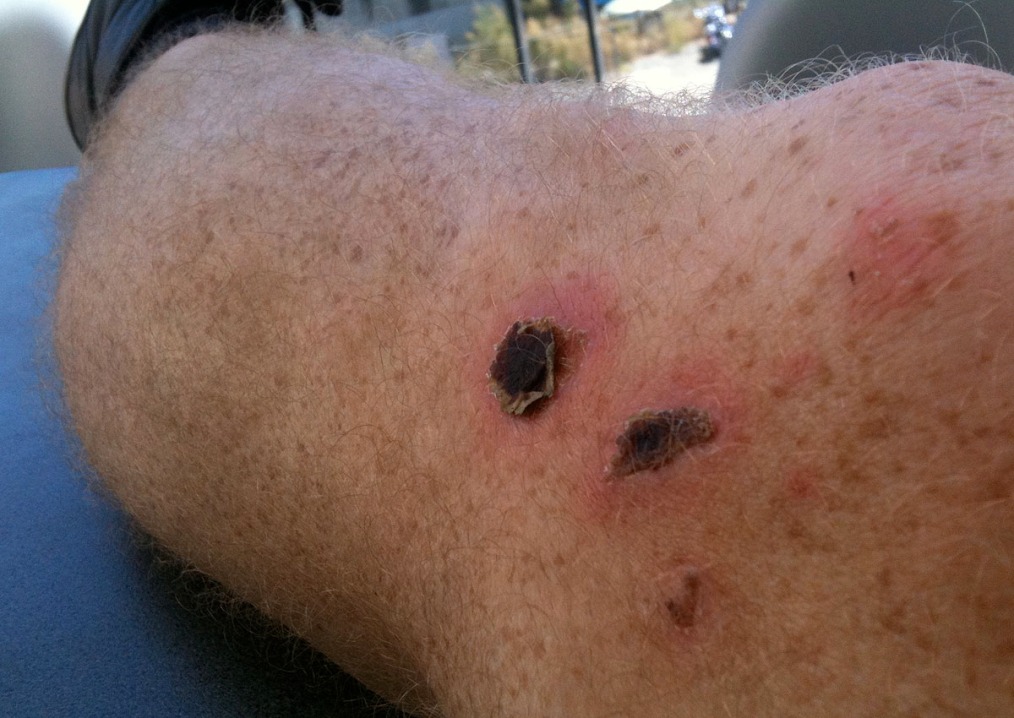 SCABS: the only good thing about crashing your bike 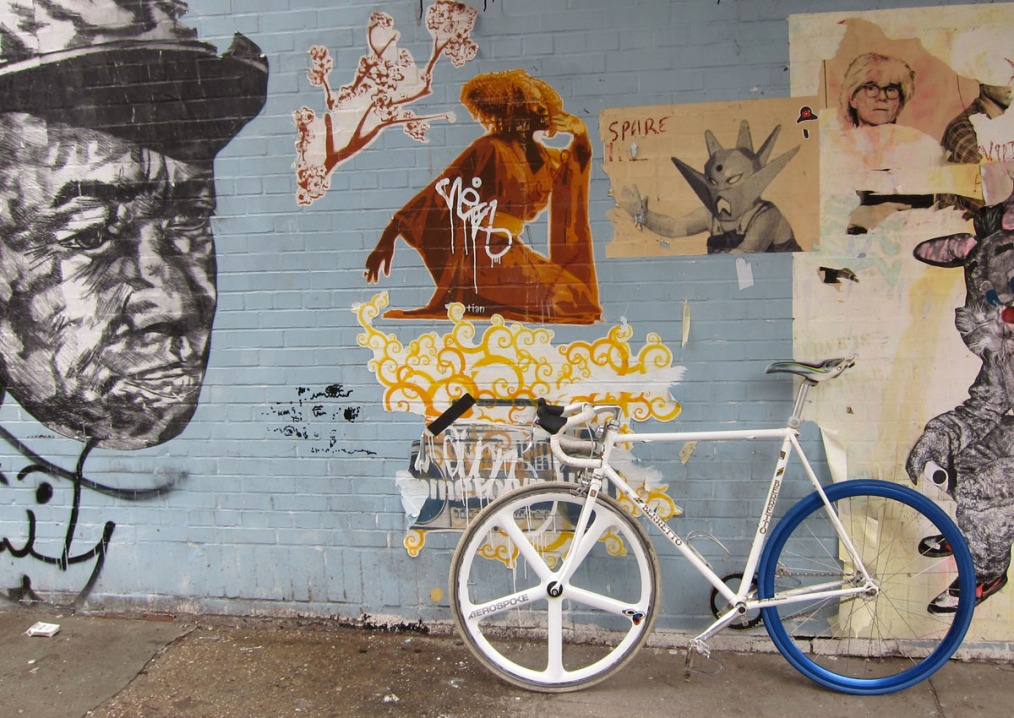 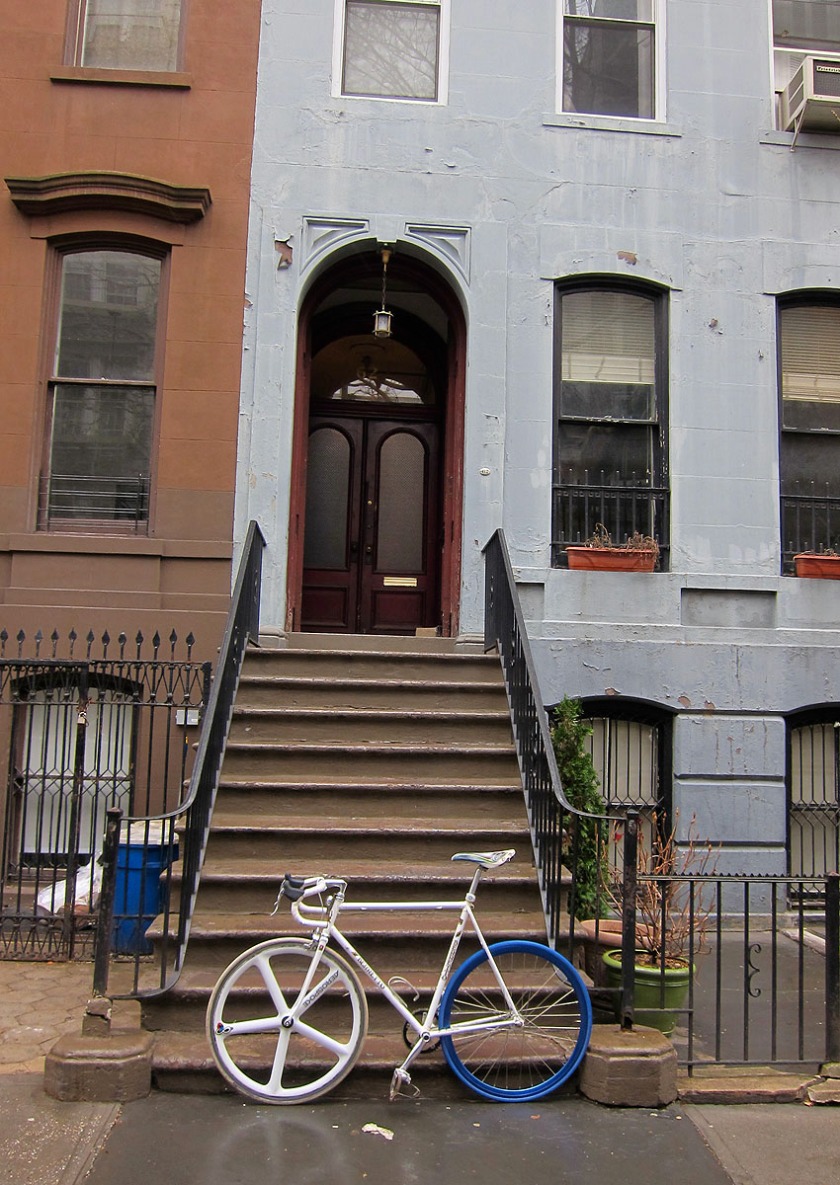 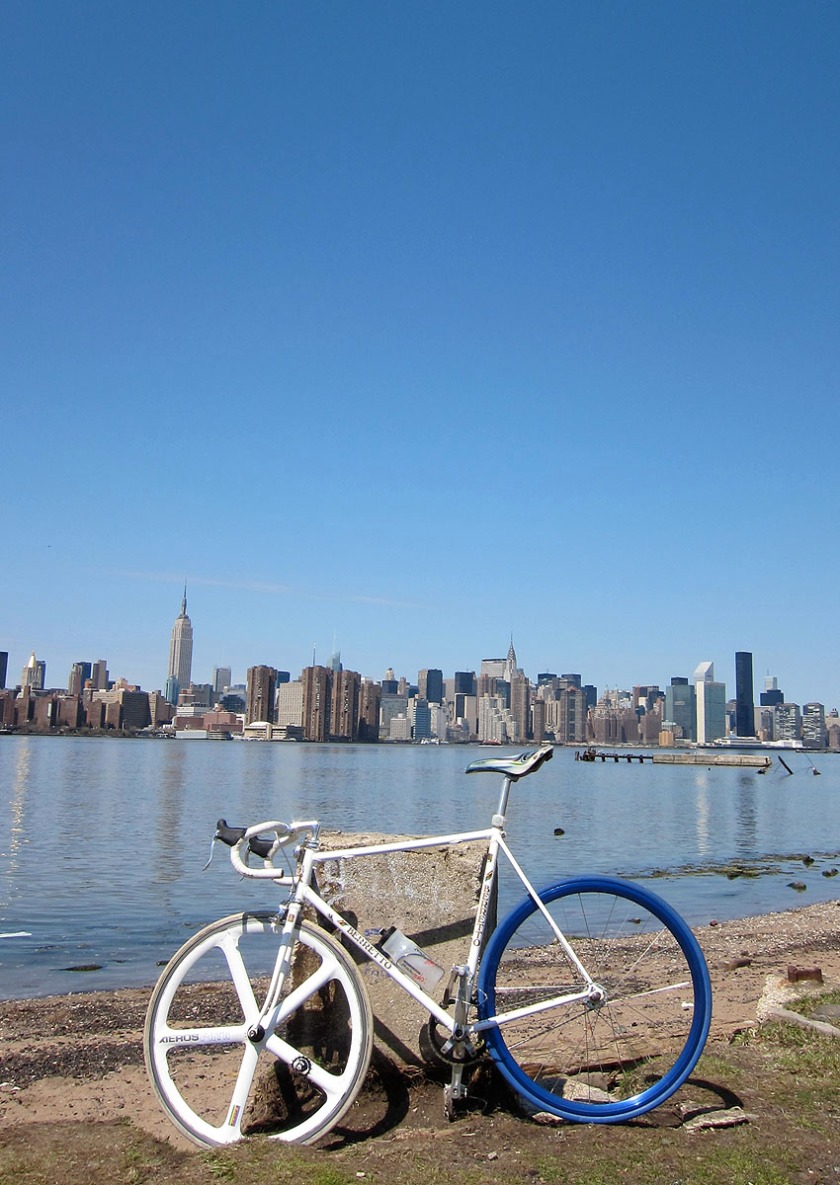 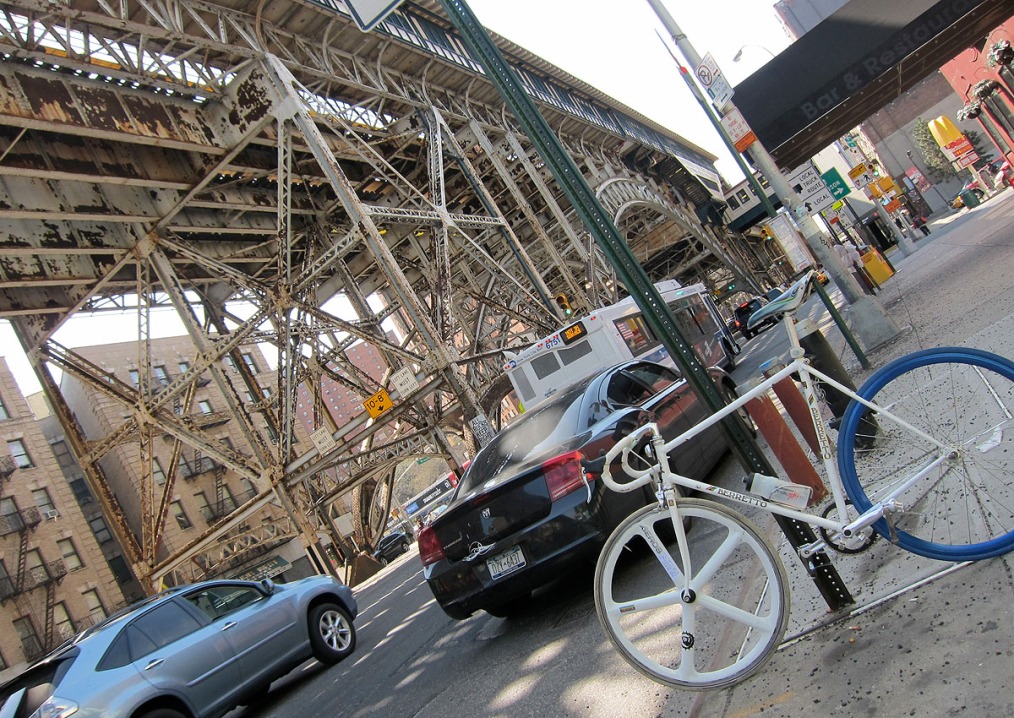