A massive effort for the boys today. Basically we rode from Brisbane to Ipswich, then out to Fernvale, past Wivenhoe and up the torturous back side of Mt Glorious, then through to Nebo, the Gap and home. So this ride was the reverse, plus some more, of this ride from earlier this year.

But the thing that differentiated today’s ride from that ride in March, apart from being significantly longer and a bunch of brutal, brutal climbing condensed into one horrendously-long section — was the fact there were no outs at the end. After Fernvale it was ride on or ride back to Ipswich, hitchhike* or curl up in a ball and cry.

And crucially, there was little or no phone coverage past Fernvale until the top of Glorious and there were no shops or towns or water or anything except road and nature for company. 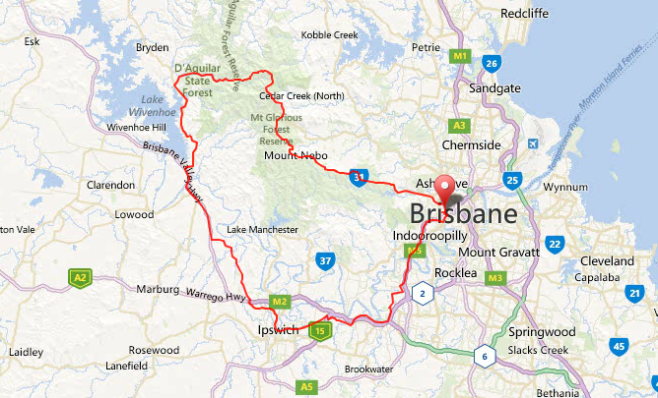 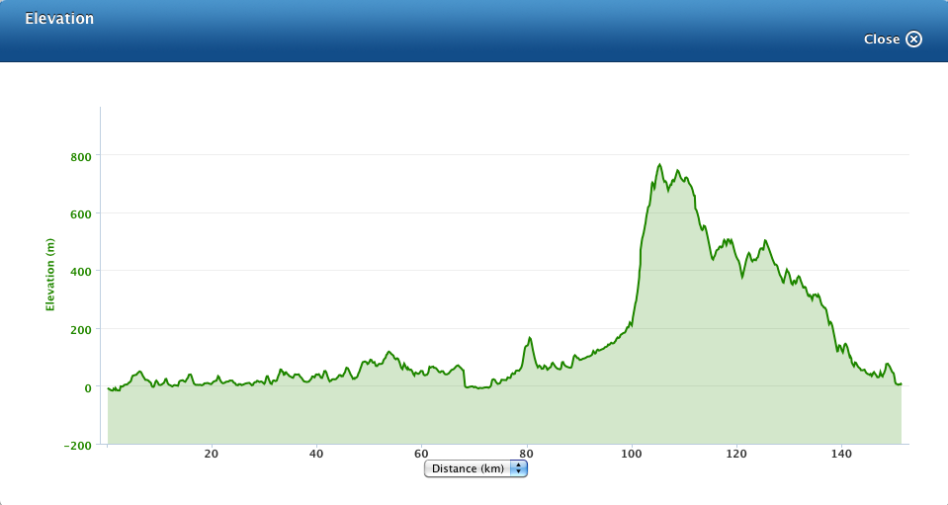 With an extra big breakfast in my belly I met the other three in our little group — Scott, Tom and Daniel (Gypsy). 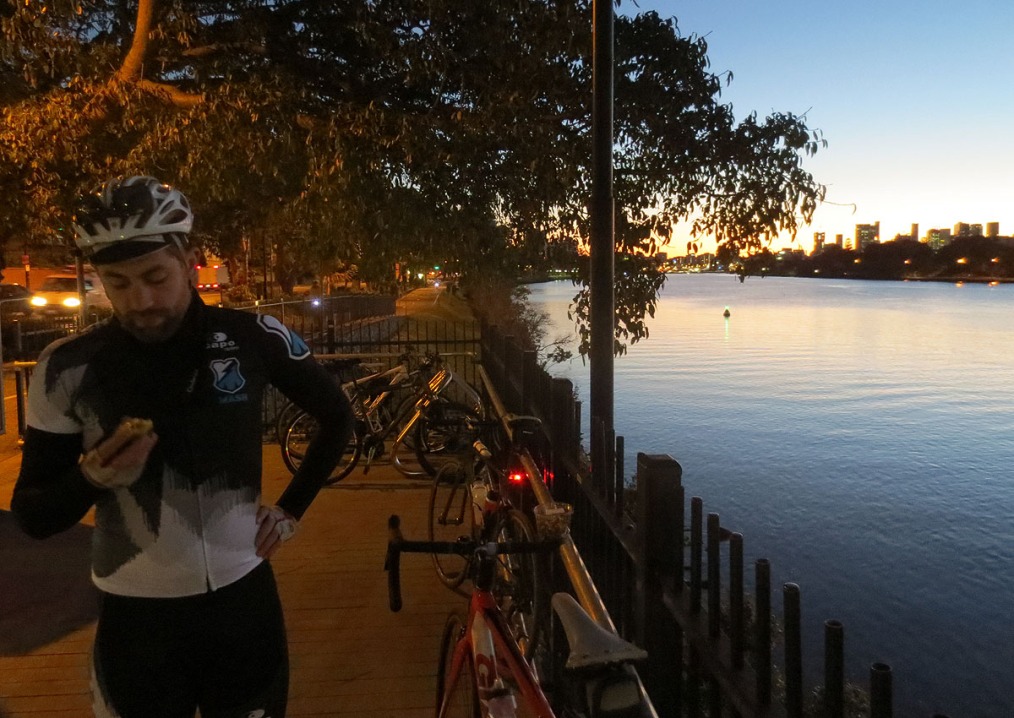 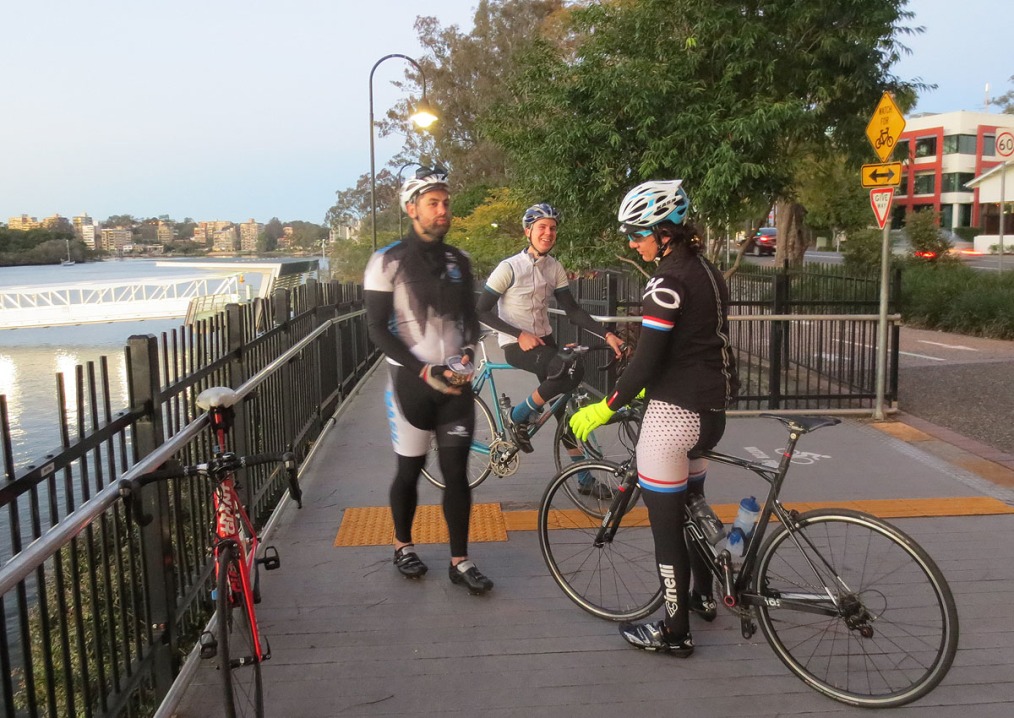 Shirts was another mysterious no-show and so we set off at about 6:10 maybe thinking he might catch up to us. The pace was pretty relaxed and apart from attempting a new route through Wacol (which some riders heading back told us was impassable) the trip to Ipswich was uneventful. It was cold and there was a bit of a headwind — but it wasn’t that repressive. 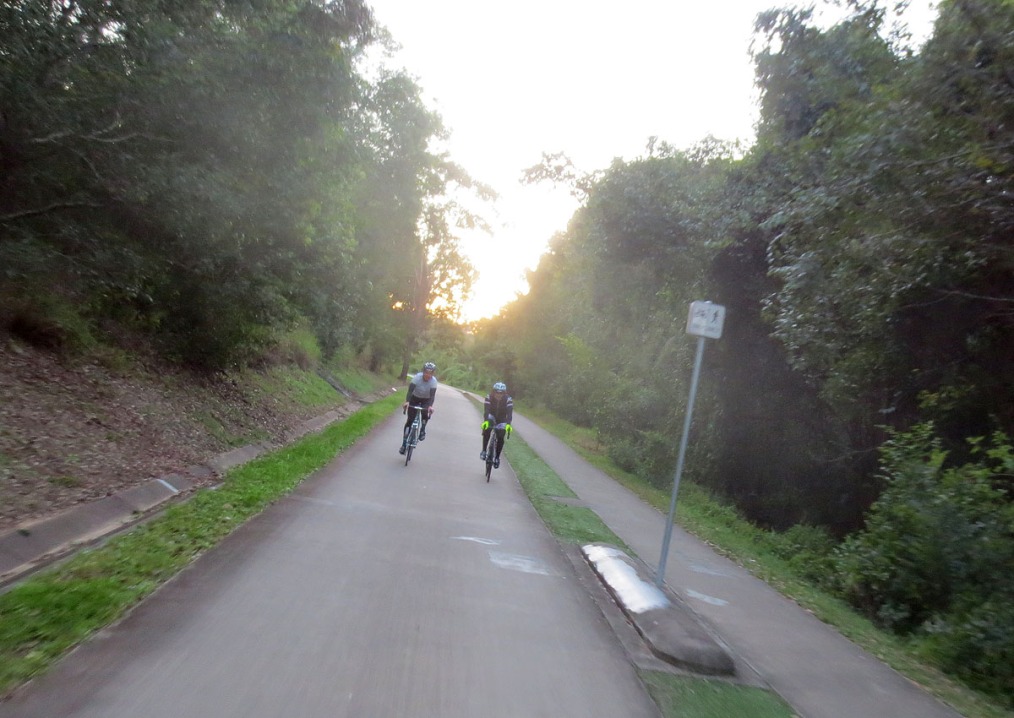 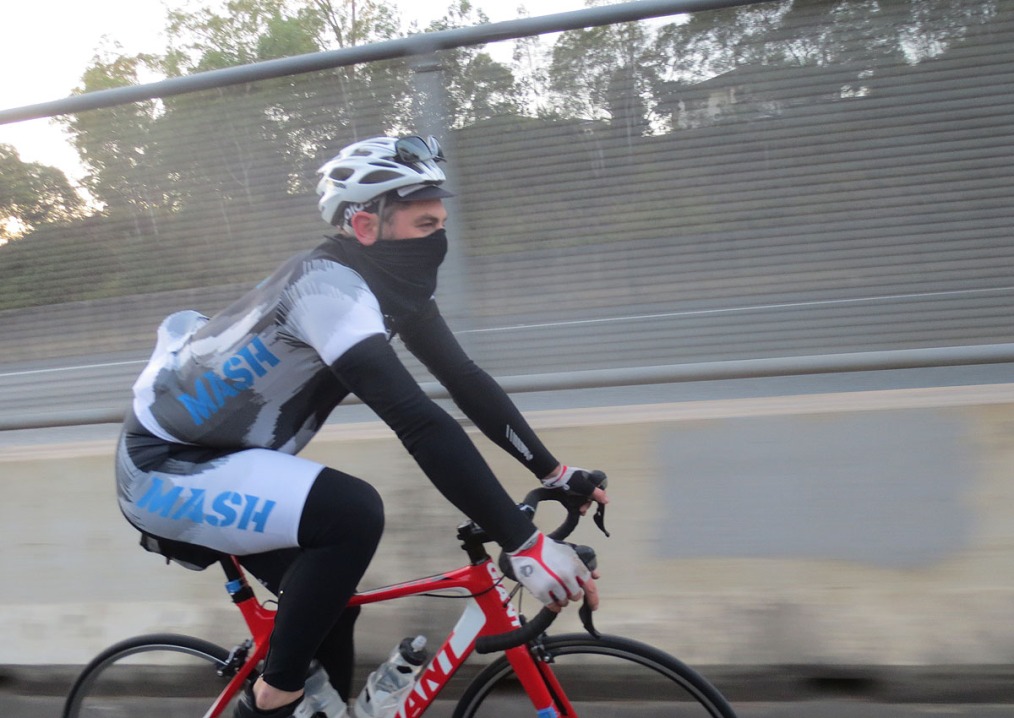 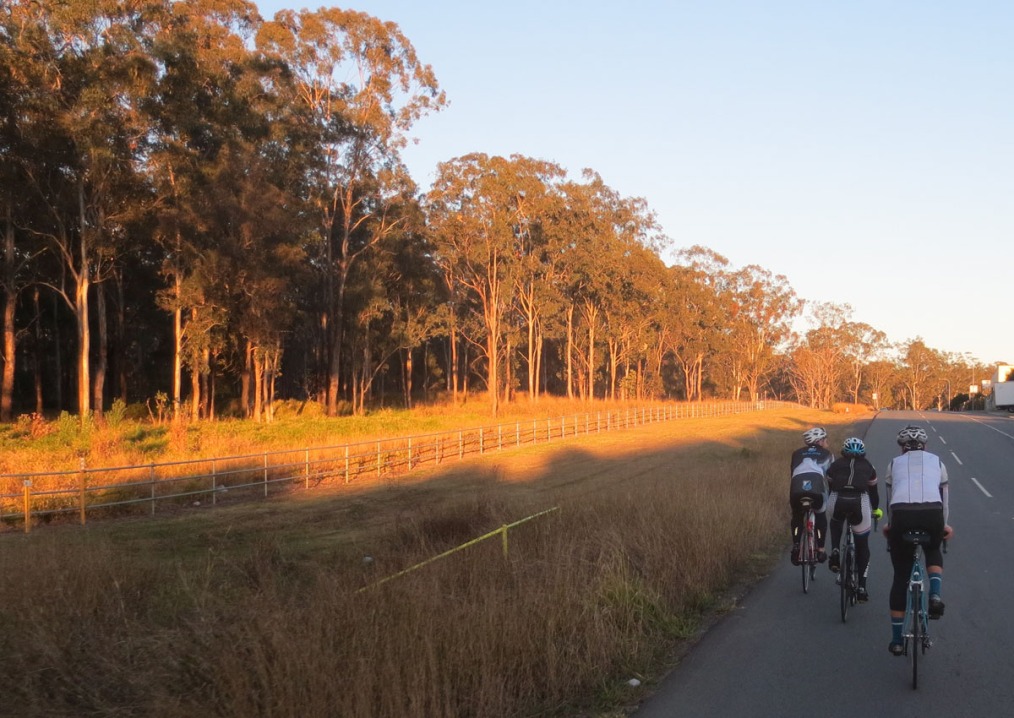 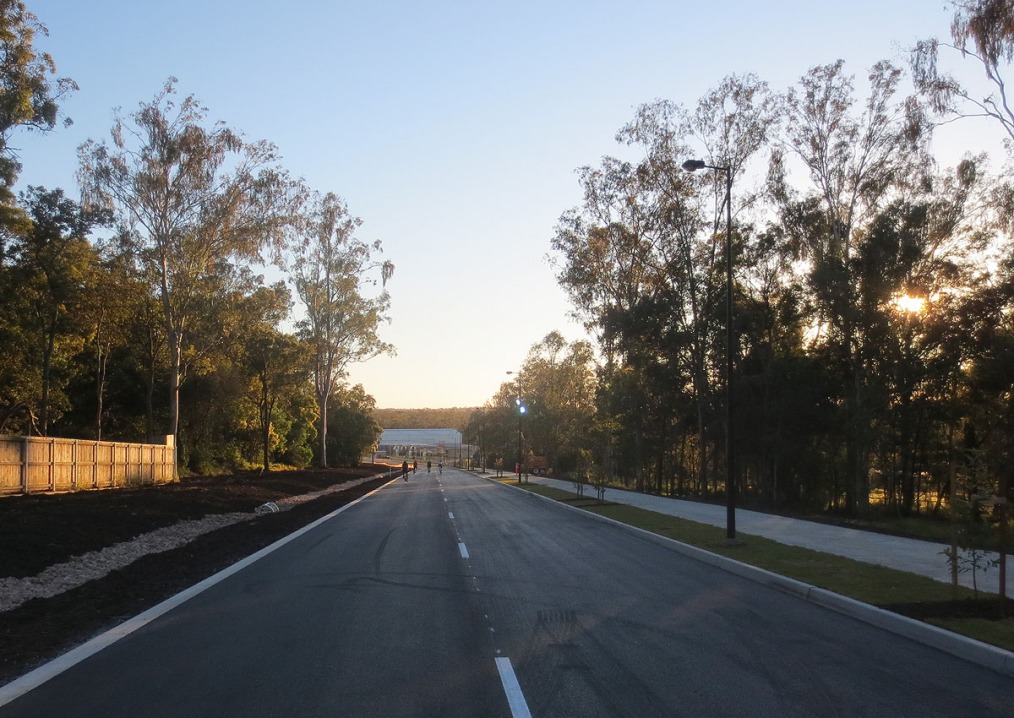 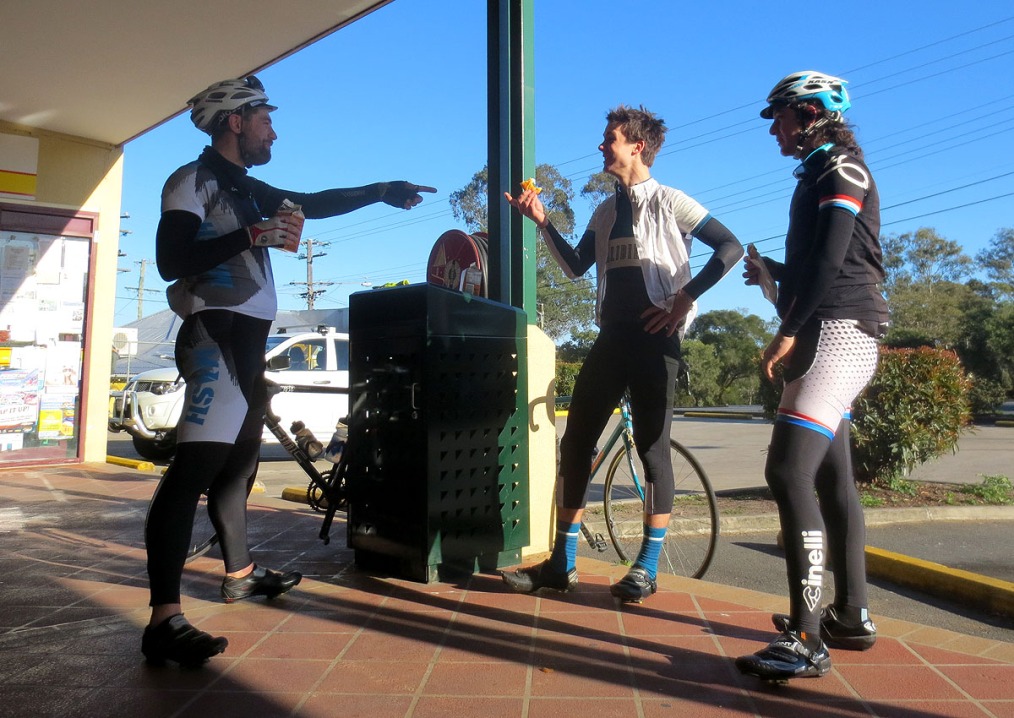 At a bakery in Brassall we scoffed some food and then hit Pine Mountain Road. Daniel was feeling a bit sore so decided to bail just a few kilometres from Fernvale. So we three continued on and at the bakery bought more pastry-goodness and drinks. But then I did something I had never attempted before on a ride.

Me being “uncomfortable” — photo by Scott

I will tread delicately around this subject — but let’s just say I felt rather uncomfortable in my ‘gastric region’ around the Ipswich mark and by Fernvale things needed to be sorted. And ‘using the facilities’ in bike kit is hard enough when you’re doing a number one — but for anything else — you pretty much have to get 90% naked. Not cool, but I was desperate. So I dashed off across the road to the public toilets half-way through my sludgy pie and accepted my fate. Luckily the facilities were clean and mercifully empty of human traffic.

And so this little adventure was a complete success and I could ride on in peace. 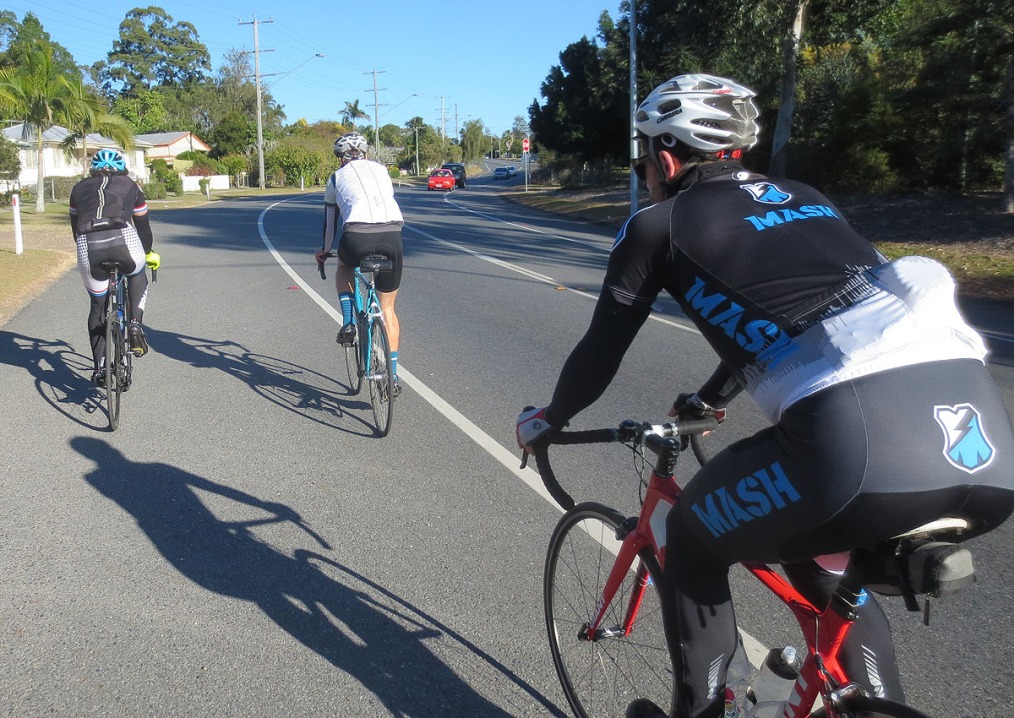 Scott and his enormous bulge. Plus he had this trail-mix carton in the back of his jersey. 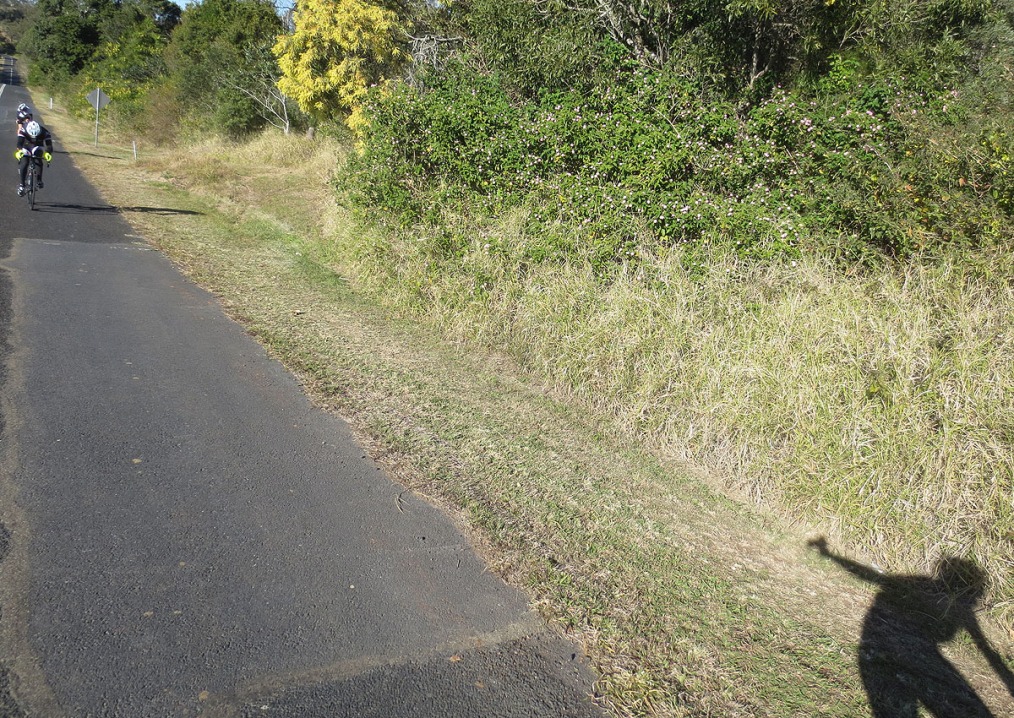 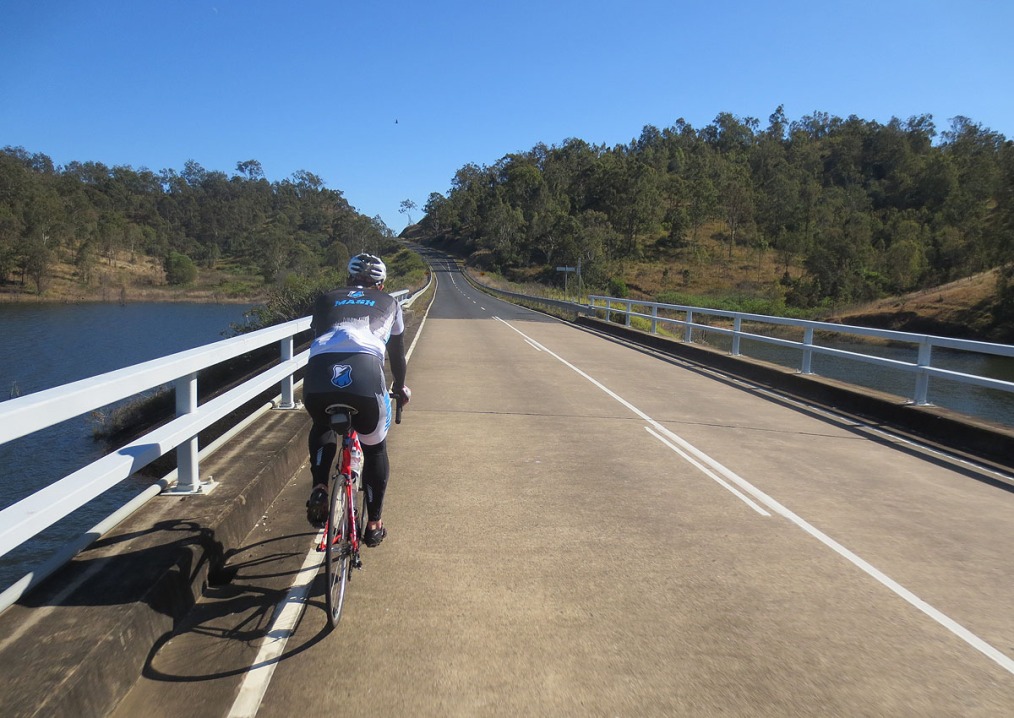 After the shitty-little-hill outside Fernvale — which wasn’t too bad and had some relief in the middle we kinda felt the wind turning into our friend and the pace was pretty respectable. A few turns and we were on the road up to Glorious. It was all false-flats here but that tailwind helped. 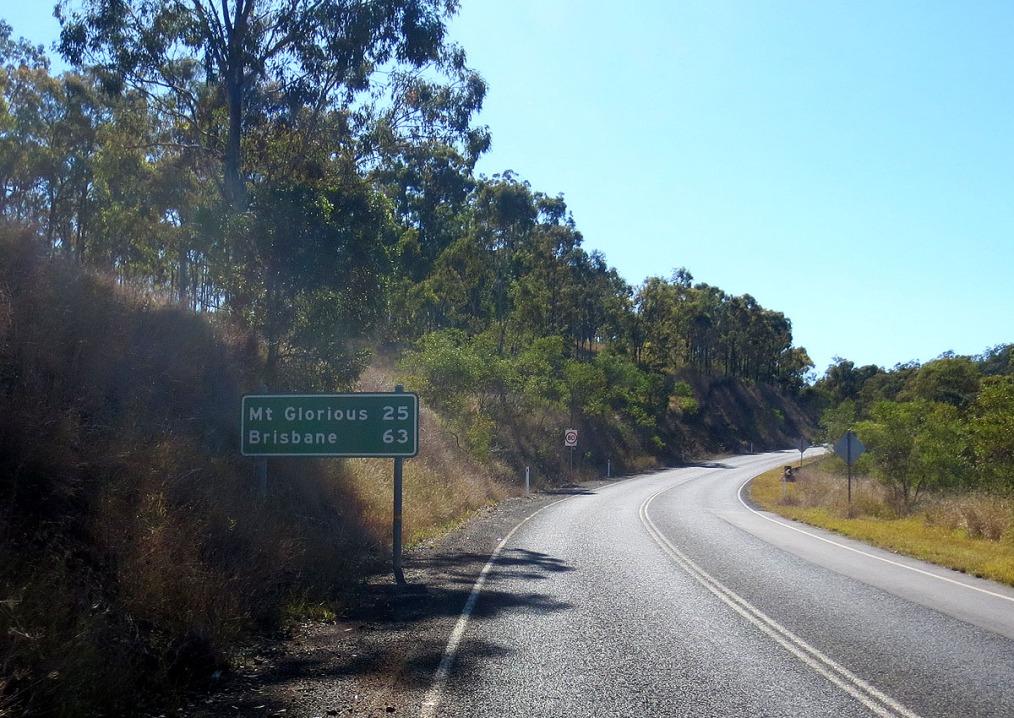 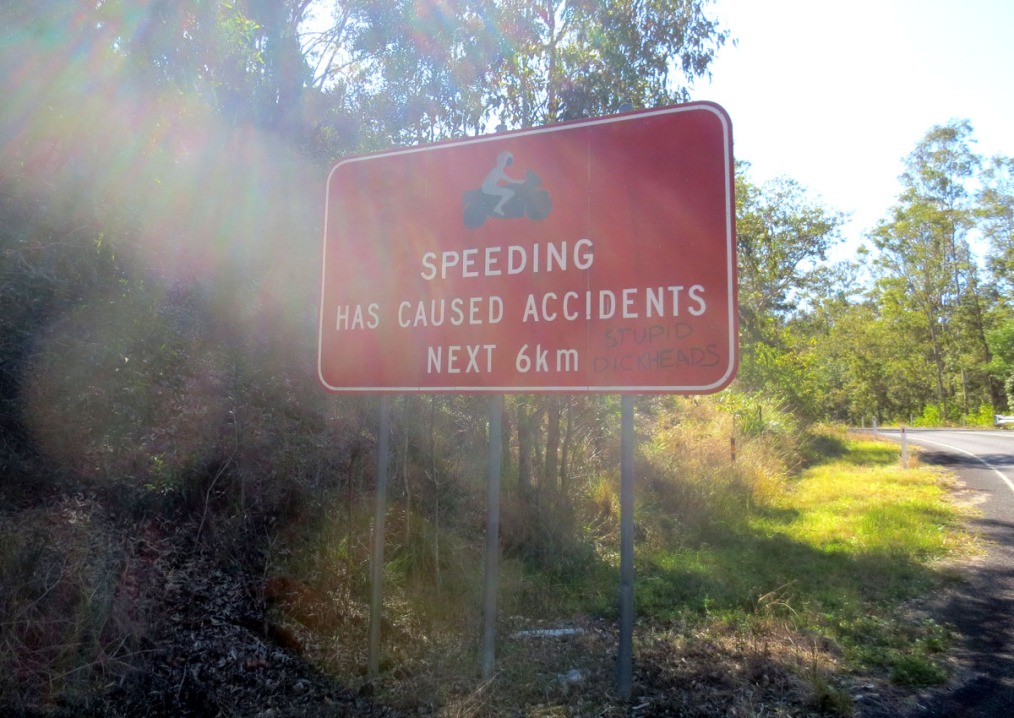 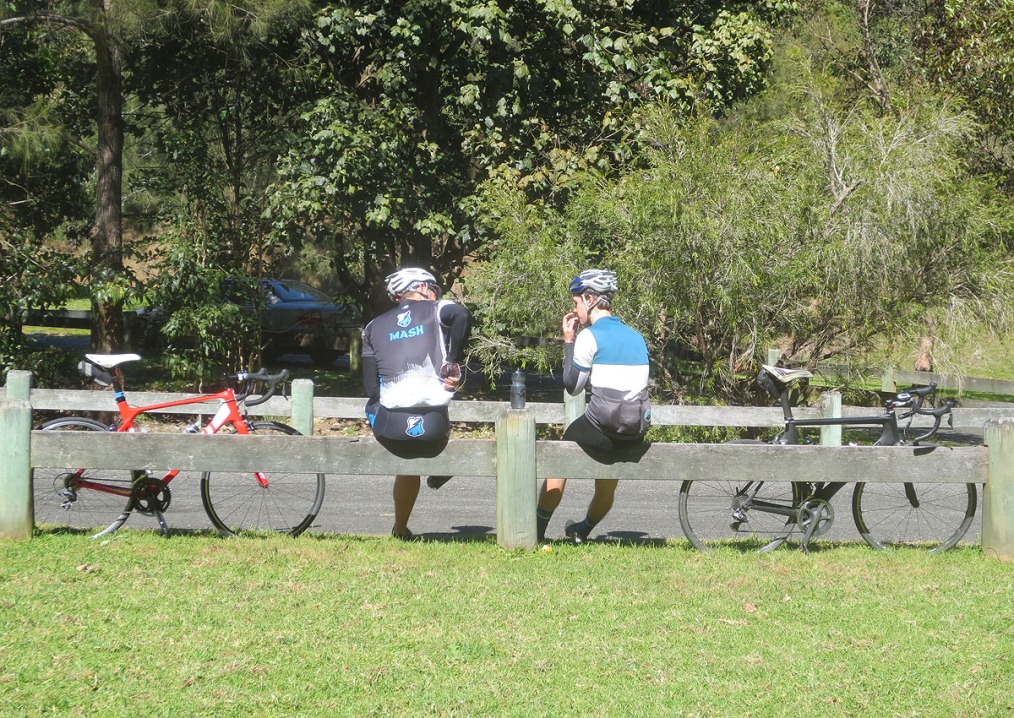 We stopped at a little picnic ground and had a snack and then Scott gave us all a gee-up. “Right! THE RIDE STARTS HERE BOYS. Everything we’ve done or you think you’ve done already today is meaningless. The RIDE starts HERE!”

And so we pushed off and that little rallying made me think I could do this with some respectability — ie not having to stop or walk the bike. But naturally that was a pipe-dream. 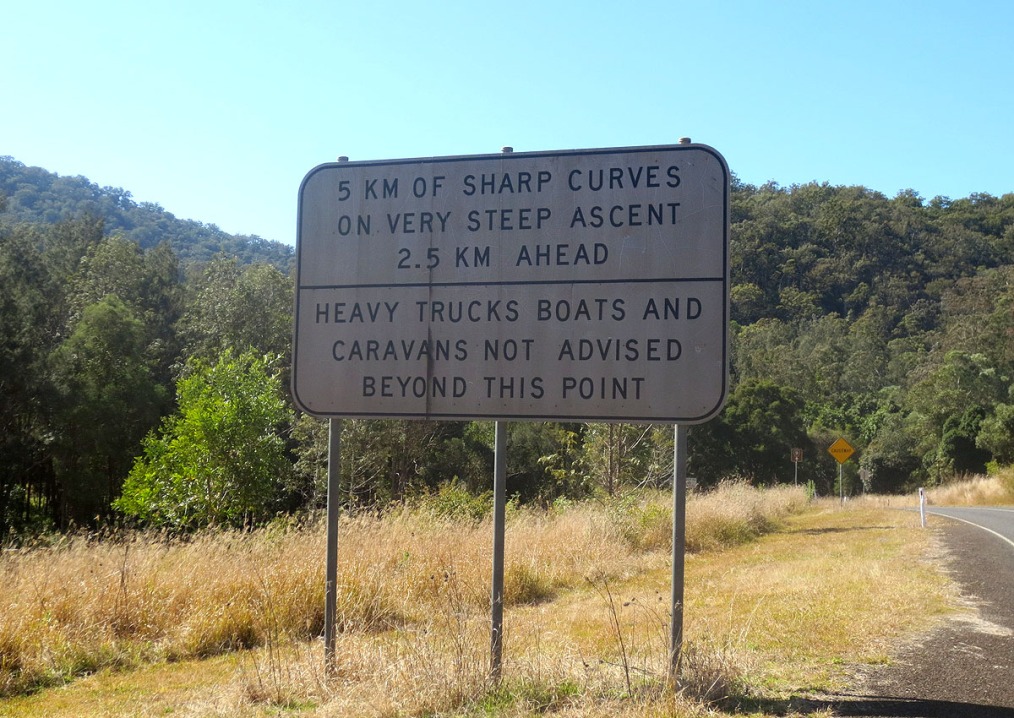 The first part was really, really tough and although I overtook Tom I could see Scott a hundred metres ahead violently fighting with his bike trying to keep the wheels spinning. Me, I was counting crank-turns and trying to get inspiration from the songs in my ears and although the graceful and relaxed tones of  “Little Eyes” by Yo La Tengo are fantastic, they couldn’t quite relax me or put me in any state of grace.

So I unclipped and trudged up around the corner to see Scott had stopped too. 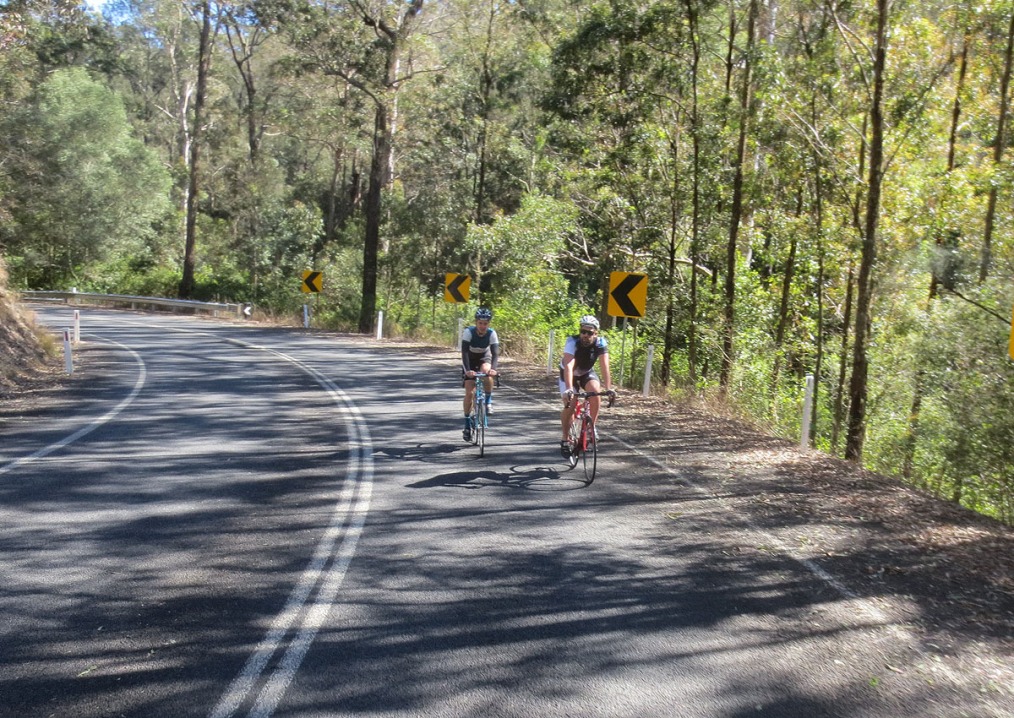 Tom arrived soon after and we looked up and the next bit looked brutal. So off we went again and I literally made it only 50 metres before my legs were about to explode. I walked about 200 metres and then back on the bike and saw Tom had stopped again too and thankfully things got more civil from here on. There was no heroics — whenever it got easier I didn’t speed up, I just kept things steady. 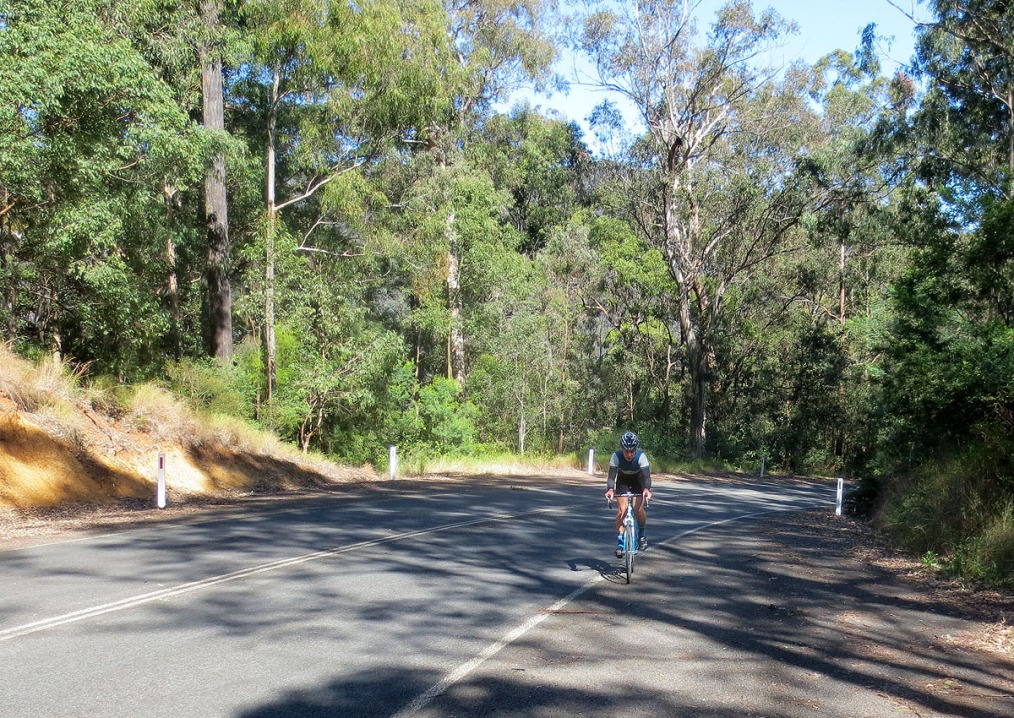 There were so many motorbikes buzzing past and also these overweight dudes on these baby-bikes powered by postie-bike engines apparently. When I caught up to Scott he was like, “I want one!” 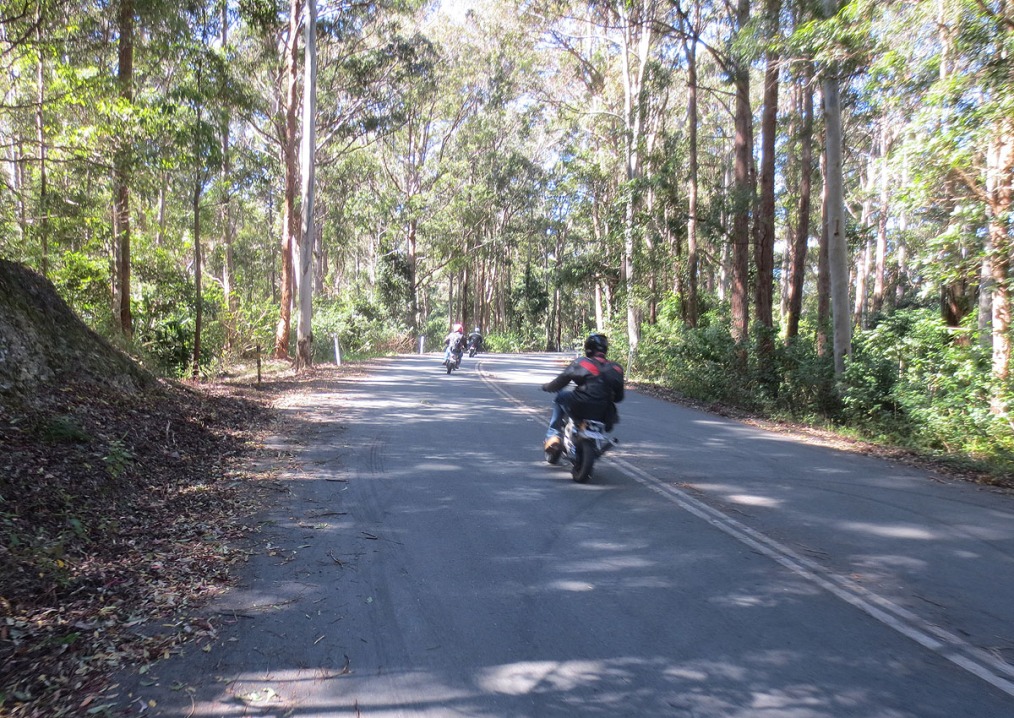 The reason I caught up with Scott was cause he had been stopped by one of these “baby-bike” fellas who had dropped something and was asking if we had seen it.

Anyway we continued on, thinking everytime there was any “down” we had reached the top. But these false summits were prolific. Eventually the mountain seemed to stop fucking with us and that undulating plateau began. 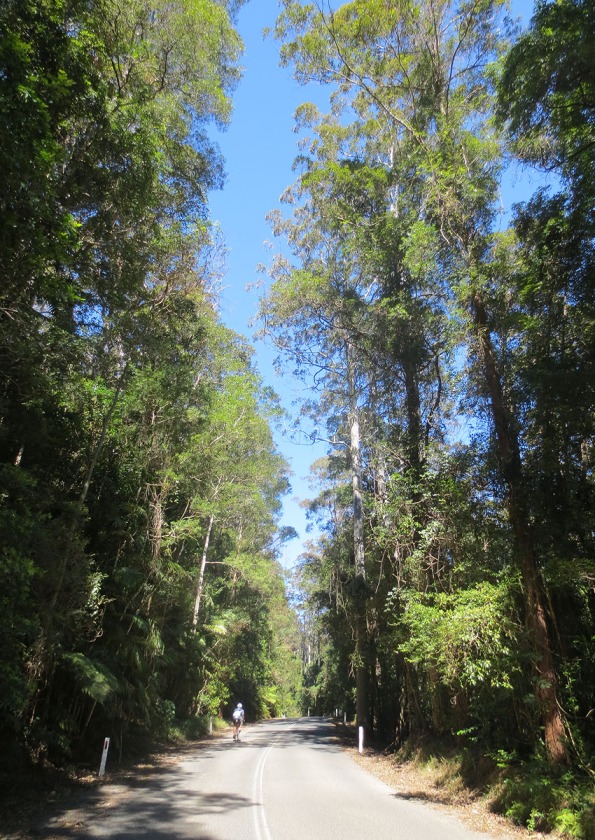 Because I am a dickhead — naturally I can’t help doing something silly with a healthy degree of frequency. So now Scott and I were riding together and Tom was a little bit behind and we smashed down this slope and were rolling along the flat bit at the bottom when I decided to whip out the camera for a shot and it immediately slipped from my grasp and went bouncing down the road. I was going at least 40kms/hr at the time. Scott saw it all unfold and stopped where the camera finally came to a rest.

I backtracked and we inspected the damage. The battery and the memory card had been ejected and luckily we found them on the road and then I said to Scott, “You know what, I bet you it still works.” And It did! Apart from a few dents and the casing being a bit warped, it seems to work fine. So I took this test photo of Scott and the look on his face says it all. Lol and phew! 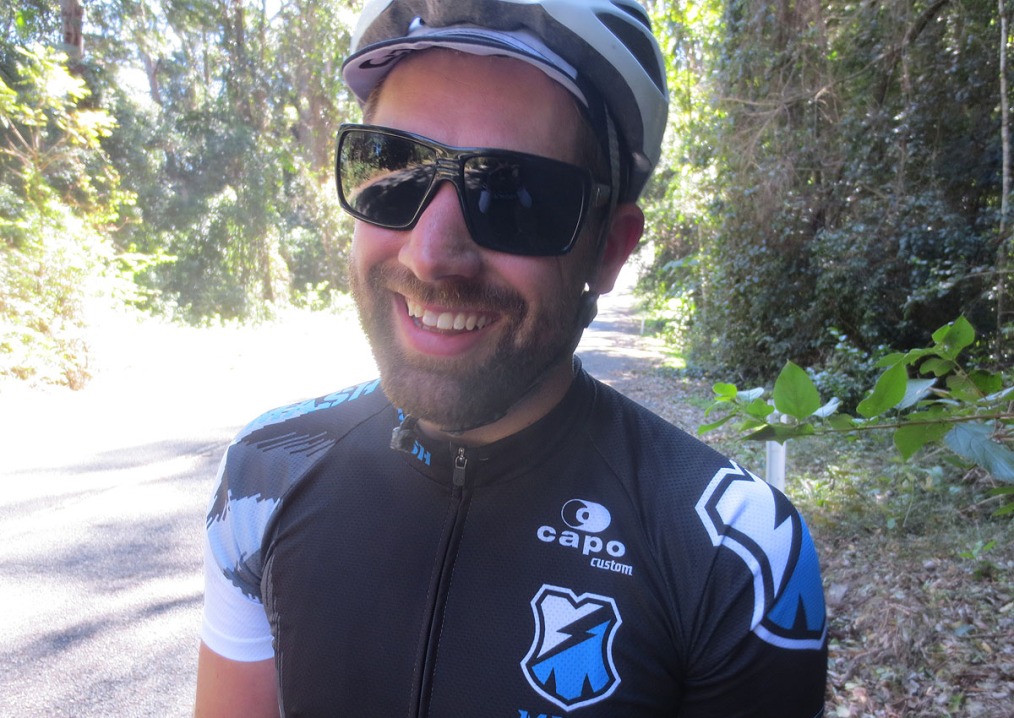 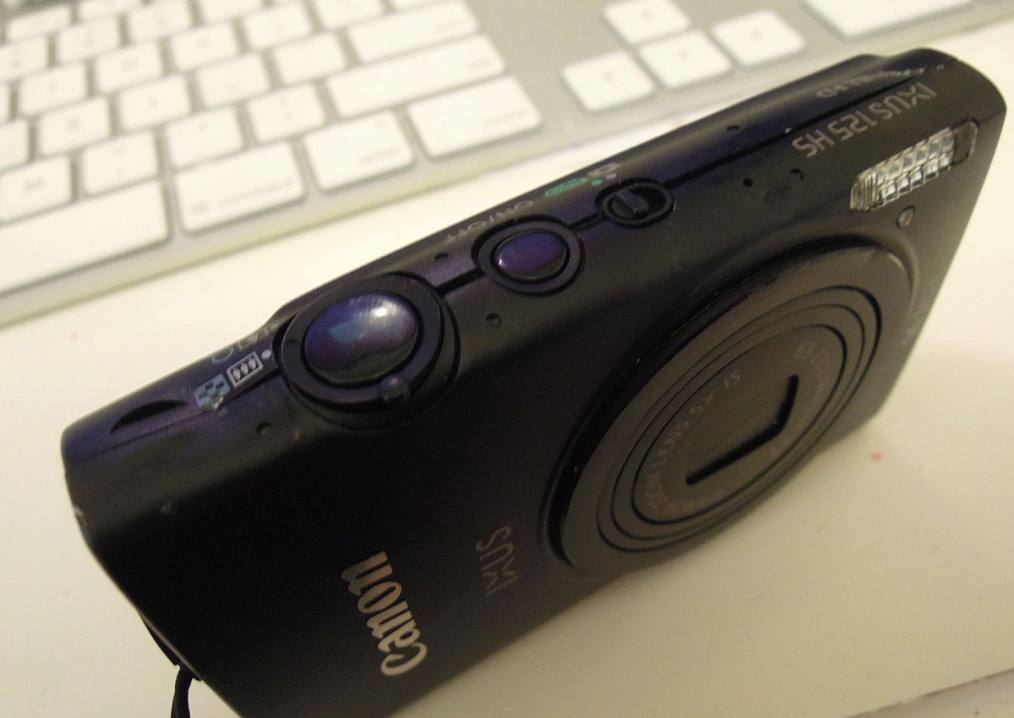 At the cafe on Glorious we had a big meal and coffee and chatted with the motorbike riders and then we set off again. The way down is by no means easy — plenty of shitty-little-inclines and the little ring got lots and lots of action. 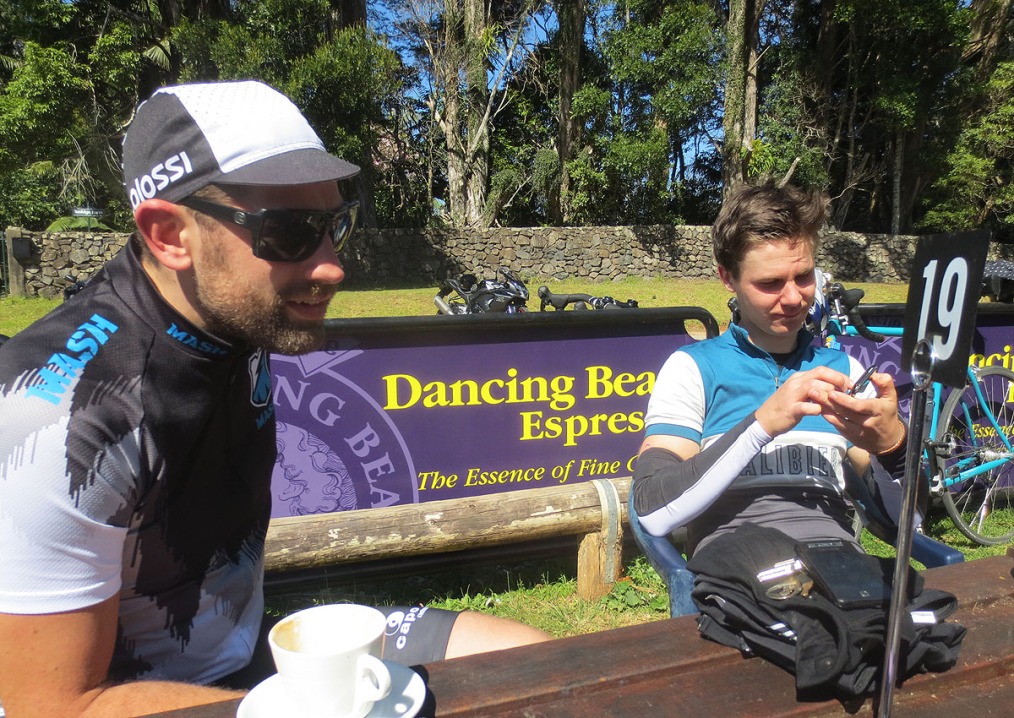 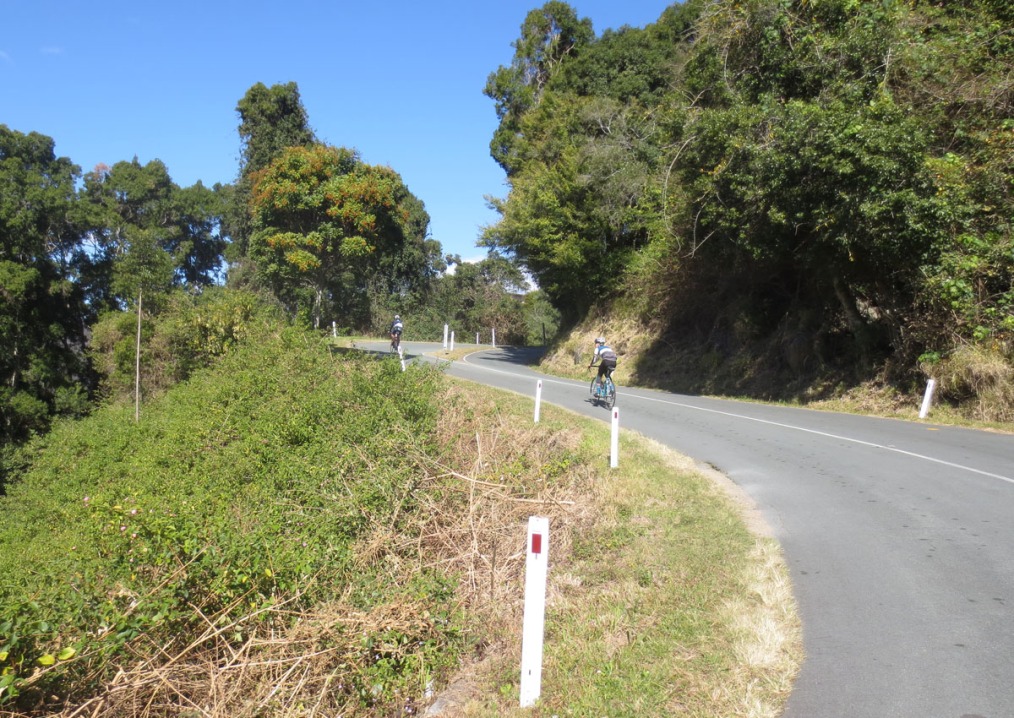 But we made it to Ashgrove and said our byes to Tom and a few minutes later my Garmin told me I had a new elevation record. 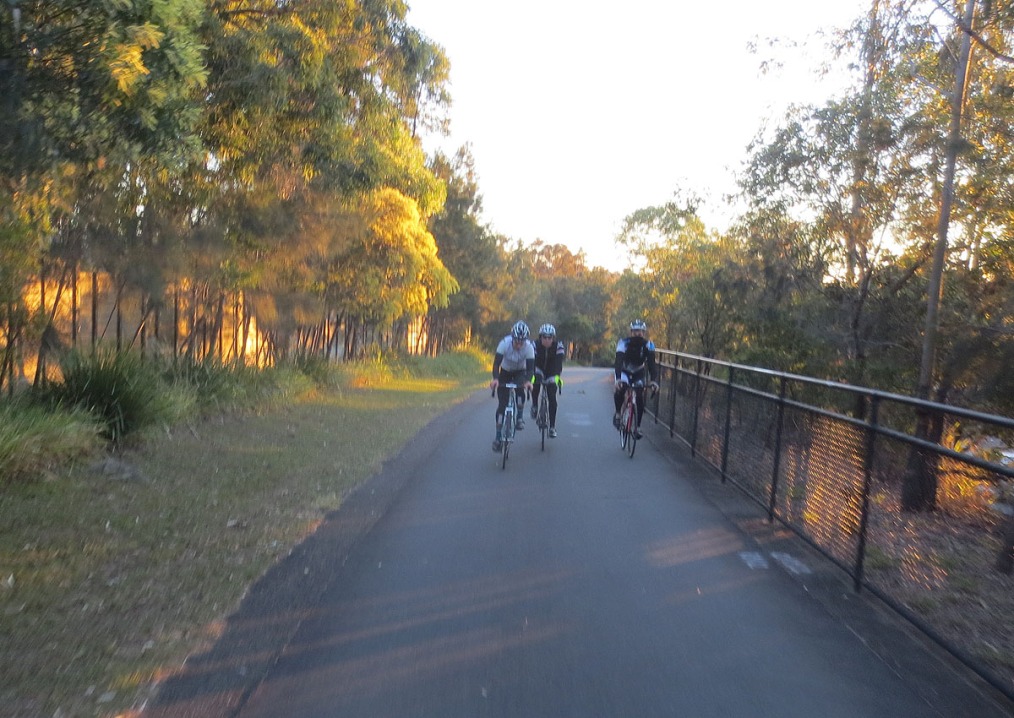 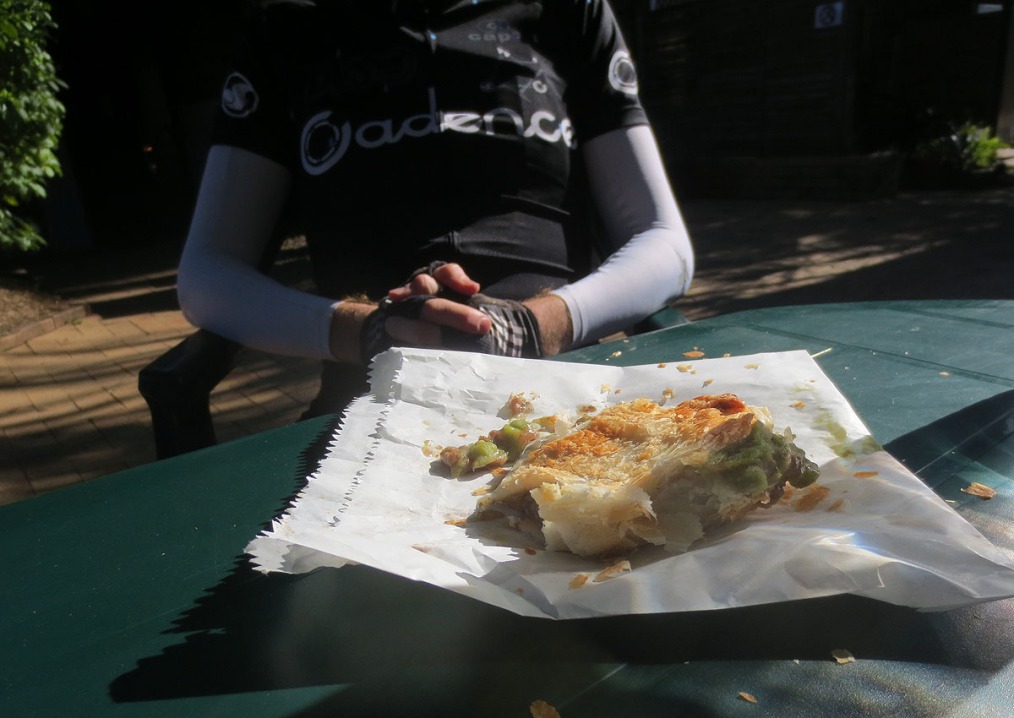 Scott took this photo. “You’ve just demolished that,” he said. And I was like, “I had to cause it keeps just disintergrating. Ugh.” 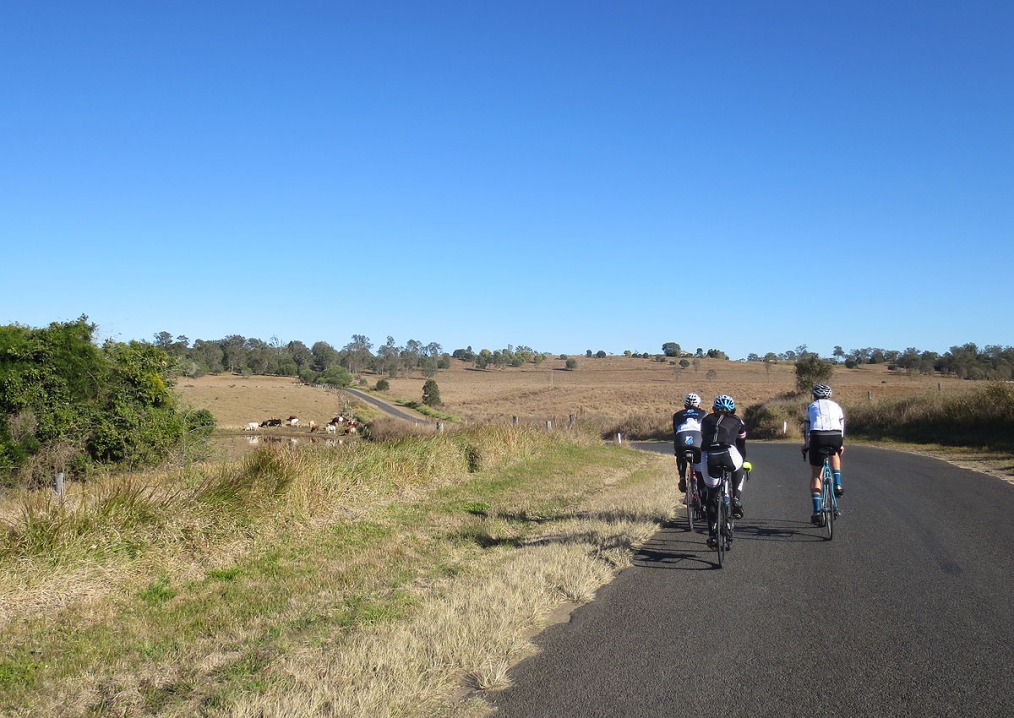 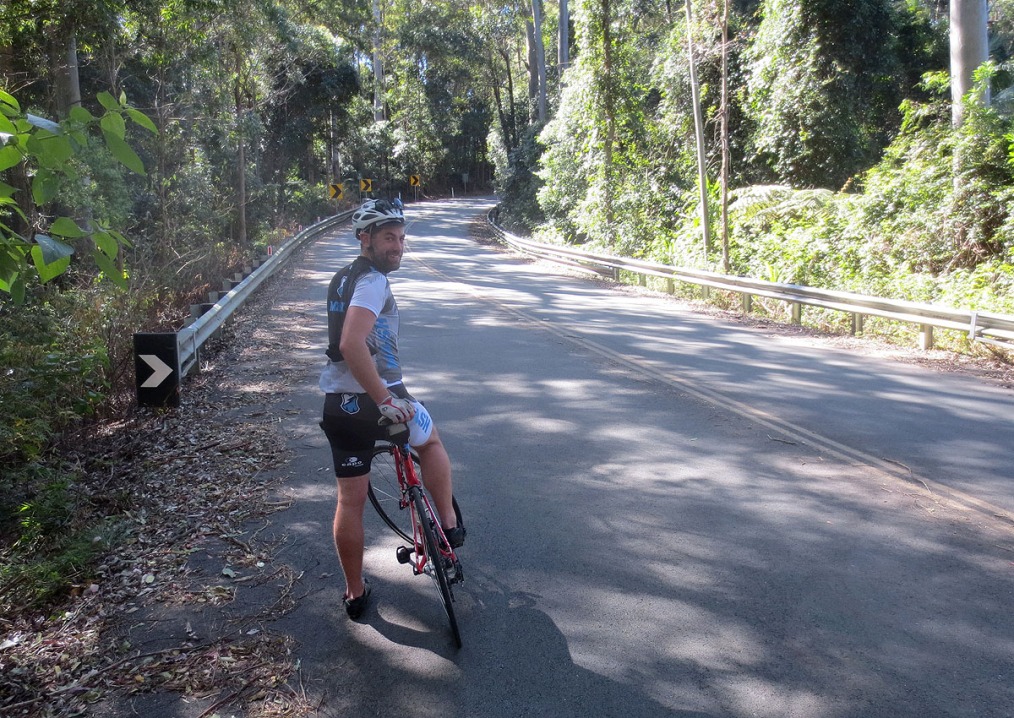 7 thoughts on “THE RIDE STARTS HERE”