So today’s guest blog is by Michael — who plays guitar in our as yet un-named ‘band’ (though I am leaning towards “Vandermint” — what do you think?). Anyway last week he drove his parents’ car, and their dog, all the way from Darwin to Brisbane — a 5-day trip through the vast emptiness of Australia’s interior. When I heard he was doing this I said, “You gotta write me a guest blog!” And he said, “But nothing will happen. There’s literally nothing out there for forever.” But I insisted and here is the tale. For a sense of the scale of the journey, here is a google map route. 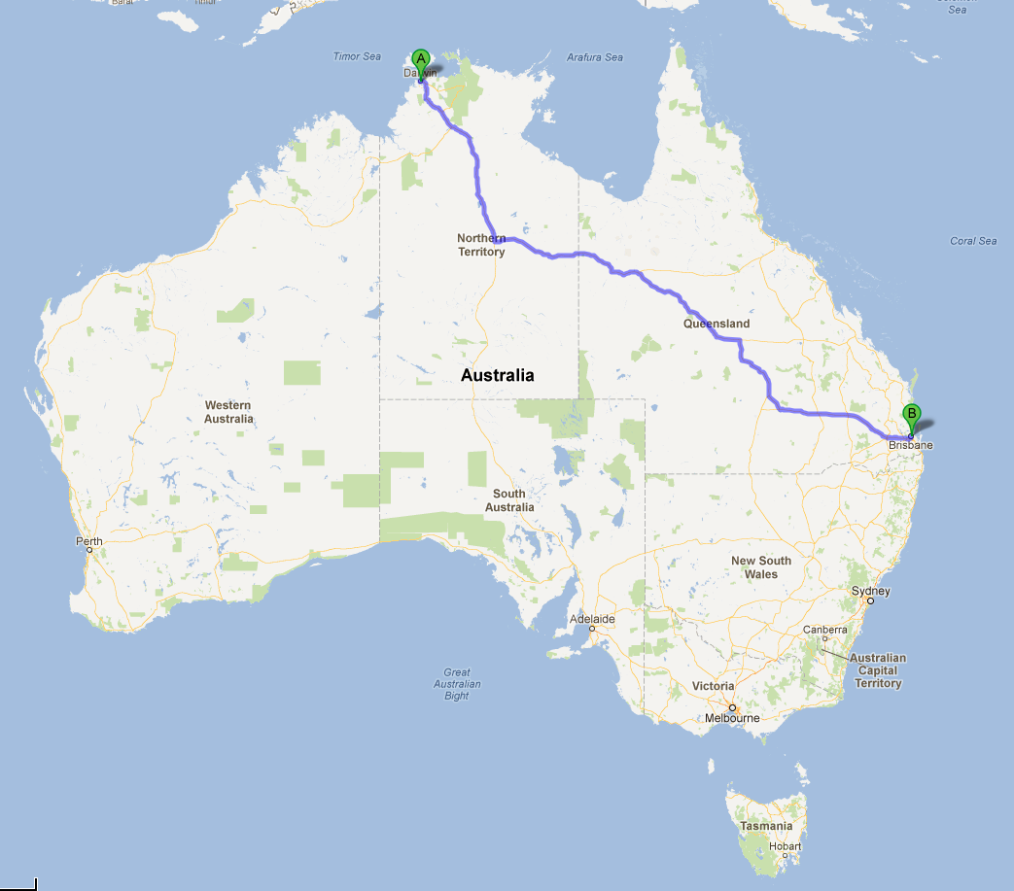 So I’m sitting several thousand feet above Darwin, and we’re coming in. For some reason, just as I should be considering the possibility of our impending doom, I choose this moment instead to get nostalgic about childhood television shows, and all I can think about is how this all seems like a cross between Sliders and Earth 2.

Listen, Earth 2 was not only a great sci-fi show, but also contained one recurring cast member whose very presence marks the succuss or failure of any film production. You know of whom I speak, namely — Tim Curry. I mean what can’t he do? Sweet transvestite; the voice of the evil sludge from Fern Gully; laser-shooting ape fighter in Congo? The list goes on I’m sure.

Looking out past the couple beside me, the insane expanse of relentlessly un-varying trees around the airport caused me to jolt, then remember just how bloody remote Darwin is. I mean, it could have been a strip of dirt in the bush we were landing on for all I knew. That was it: we were about to crash-land into Earth number two.

And similar to Earth 2, Sliders was also set on strangely Earth-like worlds, except of course there were subtle differences because, as you know, they were actually in a parallel universe (naturally). On top of this I was about to meet John Rhys-Davies in the car park—aka my Dad, his doppelganger. For any post-good-Indiana Jones peoples out there, that’s flippin’ Gimli.

So here’s the story. I was heading to Darwin and mentally preparing myself for what would be roughly a 3500 kilometre drive back to Brisbane. Though I was more worried at that point about mentally preparing myself for news of my cat’s death, or lack thereof. You see, I had heard whispers that the cats would not be taking the journey to Queensland; that they were to remain in the NT, immortalised I suppose. But perhaps I should put this into context. I wasn’t that unhappy. Sad yes, but my cat was about fourteen and too old for such a shock., so I get it.

What was hilarious though, was overhearing my Dad say cautiously to Mum:
‘Have you told him about the C-A-T-S yet?’
Dad! I can spell you know.

After leaving a dimension that was far too hot and where everyone wore thongs and had beer bellies, I began my slide south to what would hopefully be a parallel closer to my own.
I had with me one Smokey Joe. A devilishly keen doggy that did not share, but share we did, a liking of photography.

The view was really quite something. Once you get out past Mt Isa, the sheer distance between you and the horizon filled up with gallons and gallons of absolutely nothing is mind-blowing. To just see grass meeting the sky in every direction is quite surreal—I might have been on the moon, had the moon been hairy.

I was somewhere around Mt Isa on the edge of the desert when the crazies began to take hold. Okay, enough with the Hunter S. Thompson impersonation, but I did at one point realise that you can start to pick up some pretty freaking weird things through the AM channels when you are out as far as I was. For a period there, I was listening at full volume to what I can only describe as (and will now coin) neo-alien dub-step. It sounded something like an elephant jumping on a trampoline while in a nearby building, someone threw a Korg synthesiser down several flights of stairs. Then again, I can’t tell the difference between one dub and another.

I’m not sure if I did make it back to my own dimension after all that, but I suppose it’ll have to do for now until something better crops up, like a dimension where public busses are replaced with those huge war-elephants from The Two Towers — that would be neat-o.