This ride is Queensland’s biggest. It attracts around 10,000 riders, maybe more. And it is organised by Bicycle Queensland — who I have issues with. They just seem to be a toothless tiger for bike advocacy. But that is another story. And I only decided to do this ride at the last minute and got a ticket cause someone else pulled out.

But all that said, this is the 4th time I have done it. And it is always cool to ride with such a fuckload of bikes. Although I was riding with the Gear “fixay” crew — I was rocking gears cause I am still quite a bit ill and have this evil cough that just won’t quit. Ugh. But it seems to be just annoying now, rather then seriously sapping my strength like it did a week ago.

Meeting at Gear at 4:20ish. Scott and Jesse had been there since 3:30 having been fucked up by their iPhones reverting to NSW daylight savings time and automatically switching their alarms back an hour.

Lining up on Grey Street 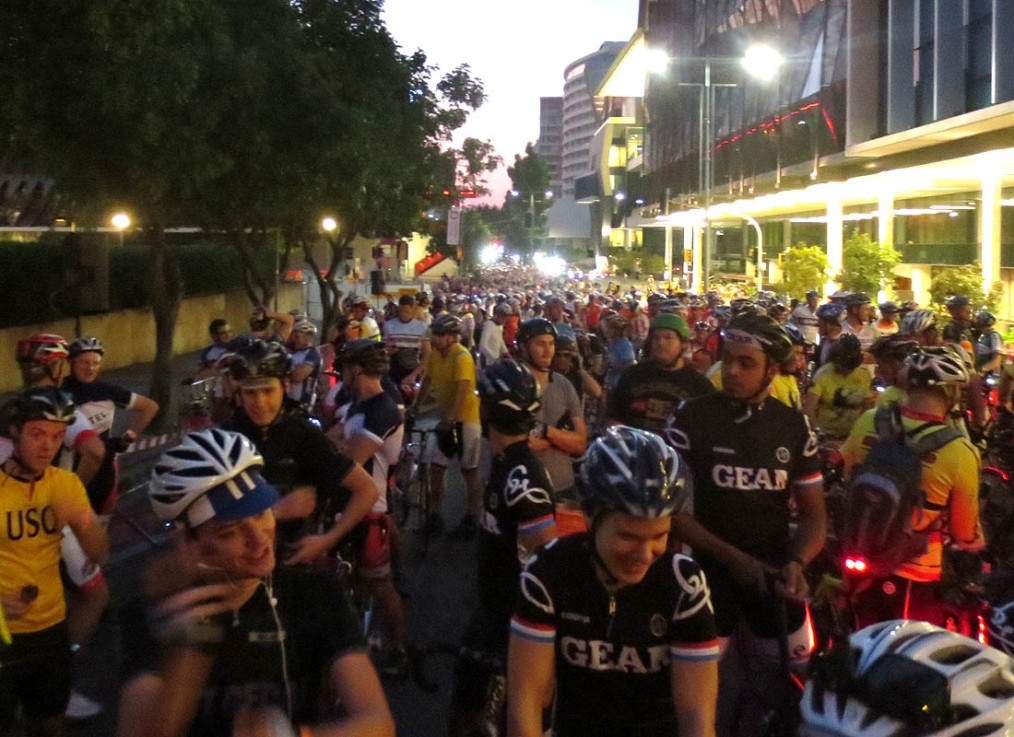 ABOVE & BELOW: Jordie smashin it

I always tell myself to take it easy, but I was feeling supreme and smashed the fuck out of the busway and then through Logan and with the average speed above 38km/hr after 40kms I finally decided I should take it easy so I dropped off the group I was with and stopped at the first “rest stop” and waited for everyone else to catch up. Jordie and Jesse seemed to miss me and must have pushed on. But soon Scott, Tom, Nick, Orlando, Erik, Bennett and the rest of the crew arrived. 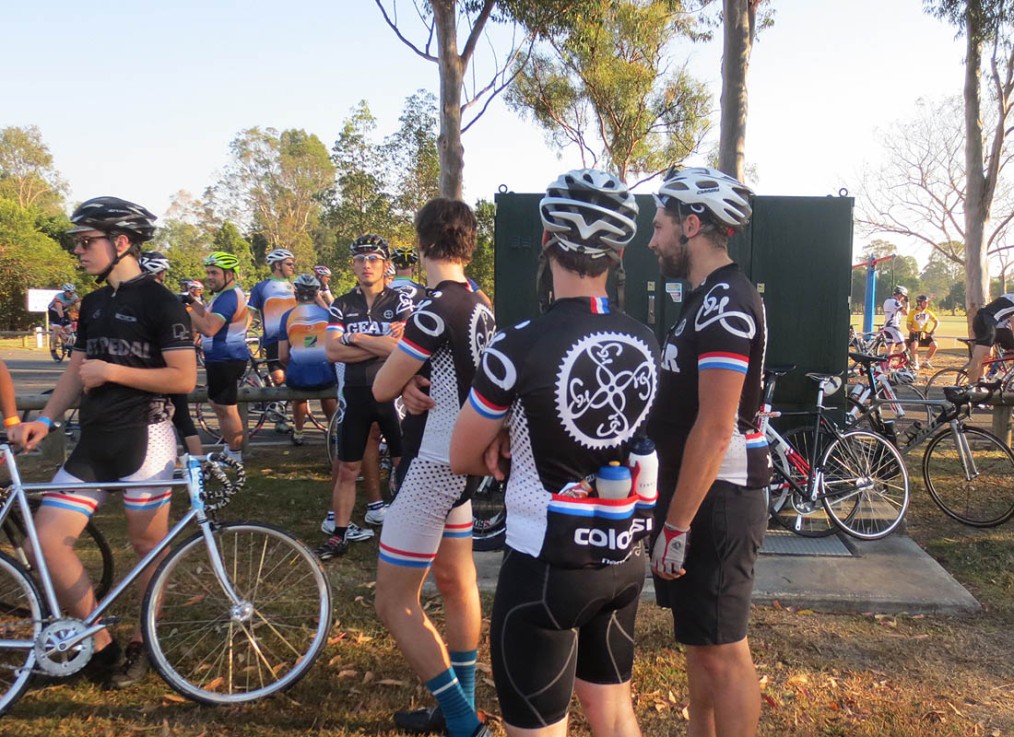 Nelson and me had been waiting around for ages and were a bit itching to get moving again, so just us two left and started smashing on. Just then we caught up to the “99 bikes” bunch and they were going along quite conservatively at what I would estimate about 35 km/hr average. I decided to hang with them while Nelson plowed on. I was happy with this pace and although it was a bit messy with the many, many riders around, the crash we had to navigate around and a few tiny hills which seemed to break people — I stayed with them all the way to Dreamworld.

At Dreamworld I stopped again and waited for everyone to catch up. Nelson changed a flat and I had some honey shots and a banana. Again once everyone had eventually arrived I wanted to get moving again so Orlando and me and another dude, (whose name I forget, sorry) got rolling. I felt good so after 3kms I just pushed and led our little bunch, plus another random who hooked on almost all the way to Southport. There were tailwinds which helped things and some traffic stops which were annoying but possibly helped rest the legs. 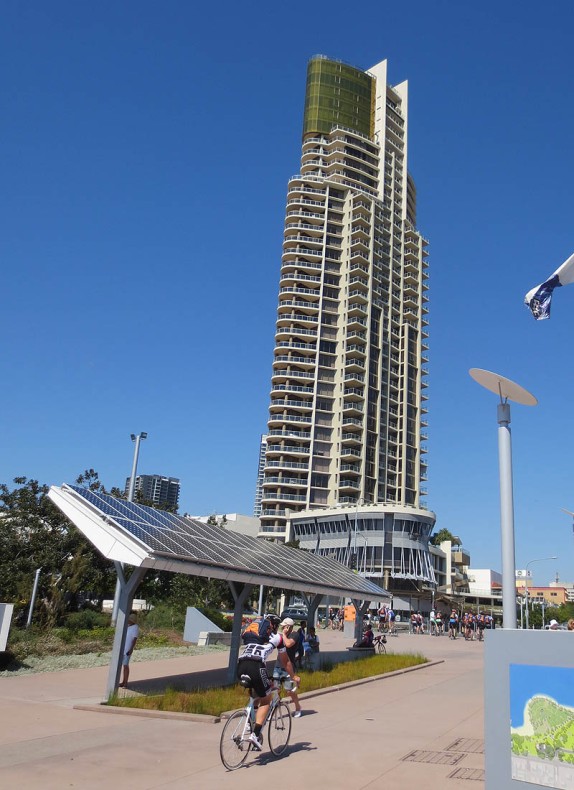 I was feeling quite defeated by the end. I had a cramp about 1km from the finish which really sucked. The temperature was now over 30 and my jersey was once again stained with the salt from too much of my sweat. But I made it and my moving speed was 37km/hr and my moving time: 2 hours, 42 minutes. Not too shabby for a ginger in this heat nursing a sickness and having to spend a few seconds each minute letting my lungs cough their heart out. 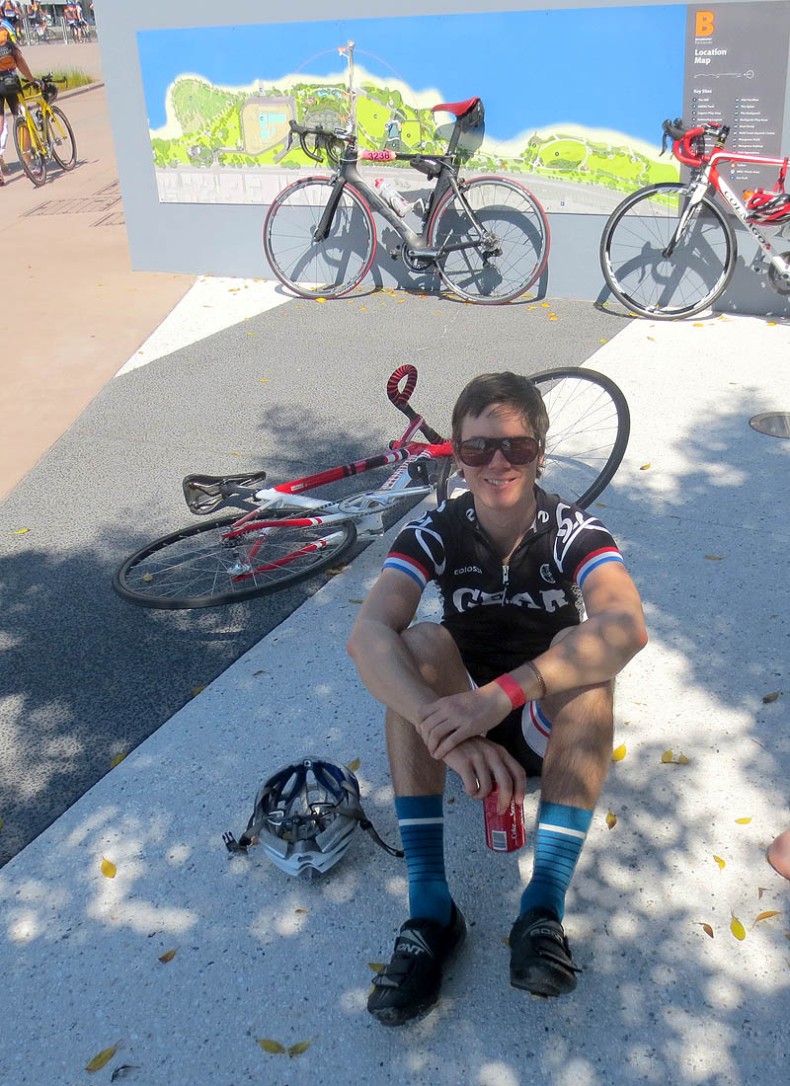 Dee agreed to pick me up at Helensvale station so I rode that 11km there into a horrendous headwind with Tom leading the way. But this big smash on the highway meant I had to wait there another hour and a half.

Salt stains on my jersey.

When I got home — this is where (and how) the cat was sleeping.