Friday was basically just watching Steve Martin in “Dead Men Don’t Wear Plaid”. The most controversial aspect of that night was a debate between Dee and me over how to pronounce “plaid”. “PLAYED” or “PLAD”.

Dee won. You say it like it rhymes with “MAD” — but without as much emphasis at the end. Like the the word just trails off.

Cool story huh? But all that drama was nothing compared to what was next!

Although I have documented the “Second Saturday” phenomenon many. many times before, I have been a bit lax in my writing of late — so I feel I should explain things again. A Second Saturday ironically starts on a Friday night, and it goes like this:

1) I love Friday nights. But when things might get real very early the next day I am a vision of discipline. I have a drinking limit and a definite bed time and a NO DANCING rule. So when your very being tells your soul “you should be partying”, instead you spend an impossible amount of time being quite ordinary. You start choosing and laying out your riding kit. Dee does something similar each and every work-day where just before bed she organises her work outfit for the next day. But me — I’m not used to that shit. So this activity is pretty intense and entirely alien.

2) Next you make sure your bike is in super-order. But you don’t pump the tyres until the morning cause they will leak about 10psi over night.

3) Then you set an alarm – maybe even two alarms – and despite that you are awake waaaay before those alarms ring and you are soon conceding defeat and up before 5am on your first Saturday. And then you get ready for that day’s adventures in a preparedness that I will maintain is more thorough than going out on a first date with the woman of your bestest dreams.

4) And then you do that epic ride which is probably the easiest part of the two Saturdays.

5) Once you are home and showered and re-hydrated and scoffed some food and had a calm-down in front of the TV with some stupid old movie on 7GEM you then head off to bed. That first Saturday thus fades into MYTH and you awake again an hour or so later and clamber out of bed just as the sun looks tired but you have a sudden buzz and you shake off that midday-sleep fuzziness and BANG! You have just scored a Second Saturday.

I cannot tell you how awesome this feels. I remember going to visit my Nanna in Ipswich on weekends (taking the train there on Friday afternoon after school and gorging myself on takeaway Pizza and Ice-cream and staying up past 8:30 to watch TV) and waking up in a daze on a Saturday in a strange bed underneath my nan’s ceiling fan like I was Martin Sheen in Apocolypse Now and being totally scared about where I was and being horrified I was late for school and then realising it was a Saturday and all that bullshit disolved and I was deep into party times.

(I am not sure why that story is relevant, but you’ll just have to trust me.)

Ryan and I did some decent riding that morning. Two summits of Coot-tha and an ascent of Mount Gravatt. I then did a bit of house/cleaning to wind down and got a tiny, tiny nap. But crucially it was enough sleepiness to draw a line in the sand between First Saturday and Second Saturday.

I wasn’t expecting to race on this second Saturday, but tragically — I am hopelessly prone to suggestion. I reckon I would get hypnotised pretty easily. Sometimes just watching people get hypnotised on TV or in a movie makes me a little fuzzy. You know when parents were trying to detonate all those youthful impressionable impulses and they would say, “Well if Billy told you to jump off a bridge would you to do it?” When I heard that logic it made total sense in my head. That fuckin Billy.

No way would I jump off a bridge if he told me so. But then it occurred to me maybe I would…

Anyway — despite saying about three hundred times that I was NOT racing and just there to say “hi” and do the slightest amount of partying — I had other commitments. I had to see Wintah and Glenn and Nelly’s band at Southside Tearoom. But of course your best friends sometimes have no understanding that you have other best friends. And so my protests were ignored and my name suddenly appeared on Gypsy’s race list. And that $5 entry fee just evaporated mysteriously from my wallet.

Once the dye was cast I worked out the maths in my mind:

2) I would smash the shit outta my riding duties and make my apologies at the end and thus miss the after-party. (boo!)

3) Then I would smash home, have a shower, get dressed and take a cab — rather than the train I had previously decided.

The format for this race was exactly the same as the first alleycat I raced way back in 2008. That alleycat was a revelation. I met so many of my bestest friends and somehow I miraculously won the event — mostly because I was paired with a character called “Shirts”.

So you raced in pairs. Tag-team. One team-member went off first while the other waited.There were 5 checkpoints. Each of us did two on our own and the last checkpoint we did together.

When Gypsy was doling out the pairs — this time Shirts was paired with Supermanlegs who is quite a considerable ally. I was matched with a dude called Justin (pictured below) who I had never met before. Immediately I said to him that I had no interest in racing hard and we had no chance of winning (cause I suck) so he should just ride safe and have fun. And I meant that entirely at the time. Entirely. But when the race started my blood began sizzling with excitement and the prospect of adventure. And Justin was up to the task in the drama department. It was decided that he would ride first. And about that time I told him how I had won the first of these events. But no pressure!

The four checkpoints were divied up amongst the first riders: So of the 9 that went out — 2.3 were going somewhere, 2.3 others the opposite direction and so on. I know that sounds a bit ridiculous — but it worked. Crucially, each checkpoint wasn’t as simple (distance or navigationally) as the other. So it didn’t matter who came back first to tag in their partner — that first rider might have scored an easy first checkpoint. So I wasn’t that worried when rider after rider came in and I just had to wait. But then when Pat (the only other rider left with me) got his tag and I was left there on my own I knew this was gonna be a slow night. I was philosophical. No big deal. You get a prize for dead last!

About 1 minute later Justin appeared and I got my manifest and I read the map upside down and luckily I was stuck at some lights and decided to check the map again. Then I smashed over the Victoria Bridge and gave Pat a hi-five as we passed on the bike path. Meanwhile he was heading back to the “Joynt” and I was still heading to the checkpoint. A few seconds later I was getting Bennett to sign my manifest and I was fanging it back. Somehow I managed to pick the best route and arrived home just as Pat did too. 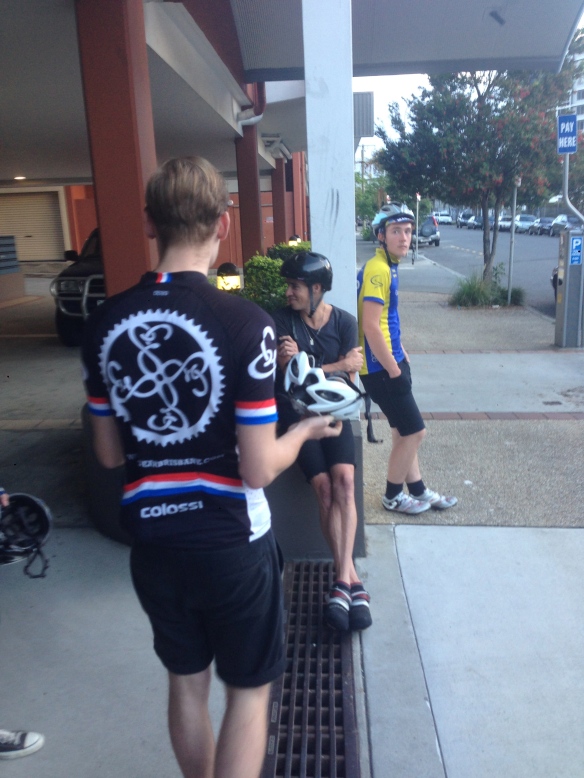 Fast forward a bit and suddenly I am going off to my next checkpoint and again we were dead last. At this point I was just trying to get the race over so I could get on with my other commitments. So I hit it up to some random street in West End where Kat was checkpointing. I took an entirely stupidly long route but managed to take a very awesome route home and scored impossibly good lights and only had one ute and one set of pedestrians try to kill me.

Then Justin and I had our own checkpoint to do collectively and I “read” the map and “saw” the street (Cribb) but I didn’t quite understand exactly where the checkpoint was — I just guessed. And cause Cribb Street was my side of town I knew the best route (which happened to be the most boring) and we set off. At that point in my head I assumed we would be last but I thought maybe we could craw back some dignity and not have everyone back at the Joynt getting super fuzzy with booze and back-slapping wondering if we were dead and sending off a search party.

So over the Go-Between bridge we went on the bike-path side and I was about 20m ahead and then I overtake two guys and for some reason I thought they were in the race too. But then I hear this maddening scream and I come to a stop and look back and see Justin being cleaned up by one of them randomly turning off the bike path. He has a low-speed fall and I swing back to check and by the time I am there he is back on his bike saying he is OK. (Later he would say the crash put his shoulder out. eek!)

So we continue on and through the underpass and suddenly there is Dayne and he gives us both a zip-tie. And at that point he says we are SECOND.

At that point the blood rushes to my head. “If we get second place that will be quite a tale. Quite.” So we ride on, backtracking our route and soon Gypsy is there and telling us we got second place. Amazing. Justin and I HI-FIVE and then I have to leave! As painful as it was ignoring that glory I had to get home and on to my nesxt adventure. But it was crazily cool to get that buzz that we had come second — and despite all that adversity. Wow. I felt quite amazing it should be said.

So a $45 cab ride later I was at Southside Tearoom. I did stop at the Joynt to get my bike lock and my dufflebag surprise present from BO GEAR! Awesome.