I took this at the second Brisbane show in 2004. This is arguably the best live rock n roll photo I have ever managed I think.

I have this tendency where I become a sickly-fan-boy sometimes. And it is not entirely dignified – yet it strangely makes me happy.

And my next favourite band, after Custard, was Belle & Sebastian. And it was actually Paul Medew, Custard’s bassplayer, who introduced me. It was like he was passing the baton on. See I somehow managed to get Paul a job where I worked and he became just “Paul”, not OMFG! PAUL MEDEW!!! (And this story will soon be related in my Custard stories).

Anyway, Paul went to Rocking Horse one lunchtime and bought at least 10 CDs of bands he was interested in hearing — but had no real understanding of. This was super-brave I thought, or just a bit feckless with money. So while he was listening to something else, I asked if I could have a go at the B&S cd. And it was “Fold Your Arms Child, You Look Like a Peasant“.

And the first track on that CD was called “I fought in a war” (and that Youtube clip is a  rather confronting homemade clip btw) and as I sat at my computer doing a rather boring, repetitive task and actually having to play the CD through the computer in the days before iPods and even iTunes, I was dumbstruck at its power and ability to suck you in to its story. It was hypnotic and dark and fucking “heavy” without having to nail the point home with distortion and big drums. But at the same time – it was still rock n roll.

So I was a little late on board with this band. Ex-girlfriend Liesl had been a fan but from what I knew from looking over her shoulder every now and then while she dabbled in their music — quiet, sensitive or wordy songwriting just wasn’t something I was at all interested in.

But within 3 or 4 weeks and I had bought every stick of musical furniture Belle & Sebastian had produced. And then I munched on those tunes almost exclusively like I was a white ant and told everyone within earshot how much I fucking loved it. Like REALLY loved it. And to make things even more acute B&S were the kind of band that had a very rich and consistently above-average output. I couldn’t flaw them. It was like art. While Custard had been humble and imperfect and willing to embrace those flaws, Belle & Sebastian were still humble and “little” but also so precise, so much depth and their grandiosity was actually deserved. A more prosaic soul might describe them as “All killer, no filler” — ie a deadshit like me.

And to further illustrate this I would say a few of their B-sides I just might count in my top twenty favourite songs (like Photo Jenny, Slow Graffiti, Belle and Sebastian, I Love My Car etc).

All the while I wasn’t quite sure why I liked this band so much but I soon stopped wondering and just concentrated on the fact they were so good at what they did, I just couldn’t help but be hooked.

And one day they came to Australia. Their first show was in Melbourne and it just happened I had already booked tickets and flights to see Franz Ferdinand and the Fiery Furnaces — two of my other new most favourite bands. So it was complete coincidence they were playing as well and I organised tickets and although we missed a show in Brisbane (so we could see the FF and FF) we got over it.

Back up in Brisbane we saw their second show at the Tivoli and I was so excited and so inspired I took the day off work to make a few t-shirts for them and I gave them to my friend Shelley to give to the band. Shell had previously used to live with Beans (Chris Geddes) in Glasgow and Shelley even appears in a few B&S film clips. This is one of them.

EDIT: And today I am reminded that I met Kate, a woman I was with for a few years, when I randomly sold her an extra ticket for this show, having posted something about it on a forum. Holy moly. Life is strange and sorry Kate for forgetting that!

The t-shirt design I made — a play on my favourite song, and the state we were in of course.

And all through the show I was just silently wondering if they would acknowledge that effort and then in the encore — BANG! Beans came out wearing that shirt I had made and I could hear the crowd go nuts around me, “OMG Look at his shirt!” I was fucking chuffed. Total Amazeballs!

Also during that show my friends Cat and Alex got to sing on stage for Lazy Line Painter Jane. Here they are: 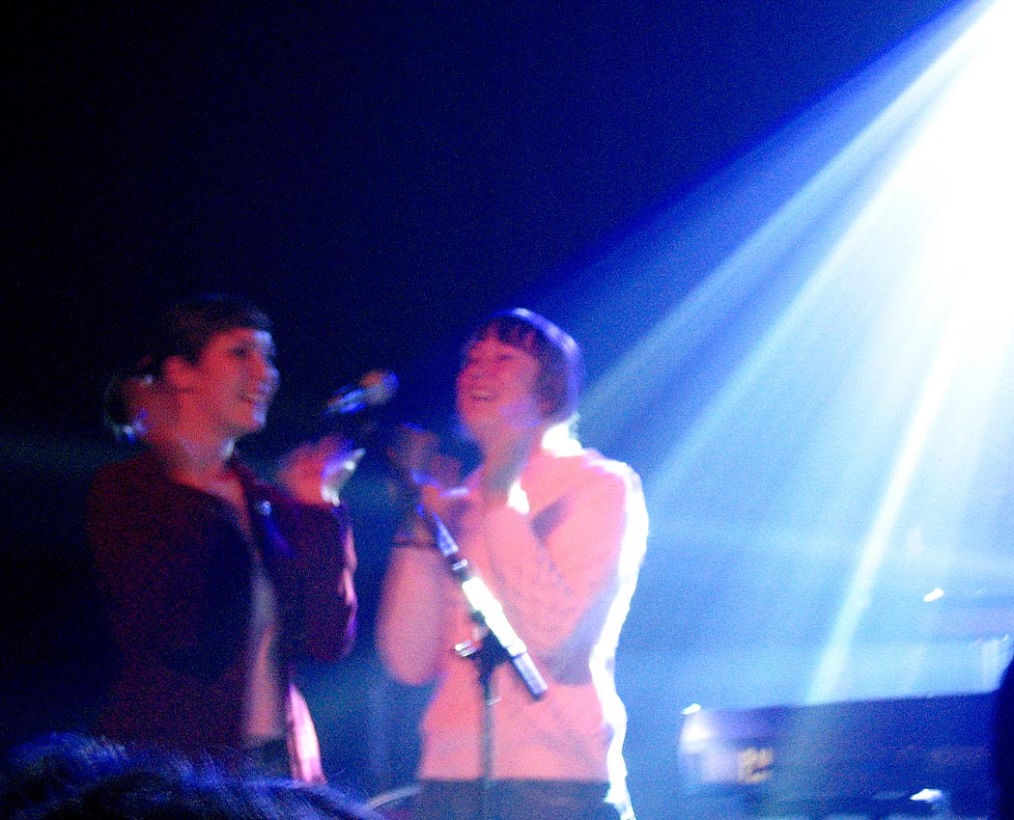 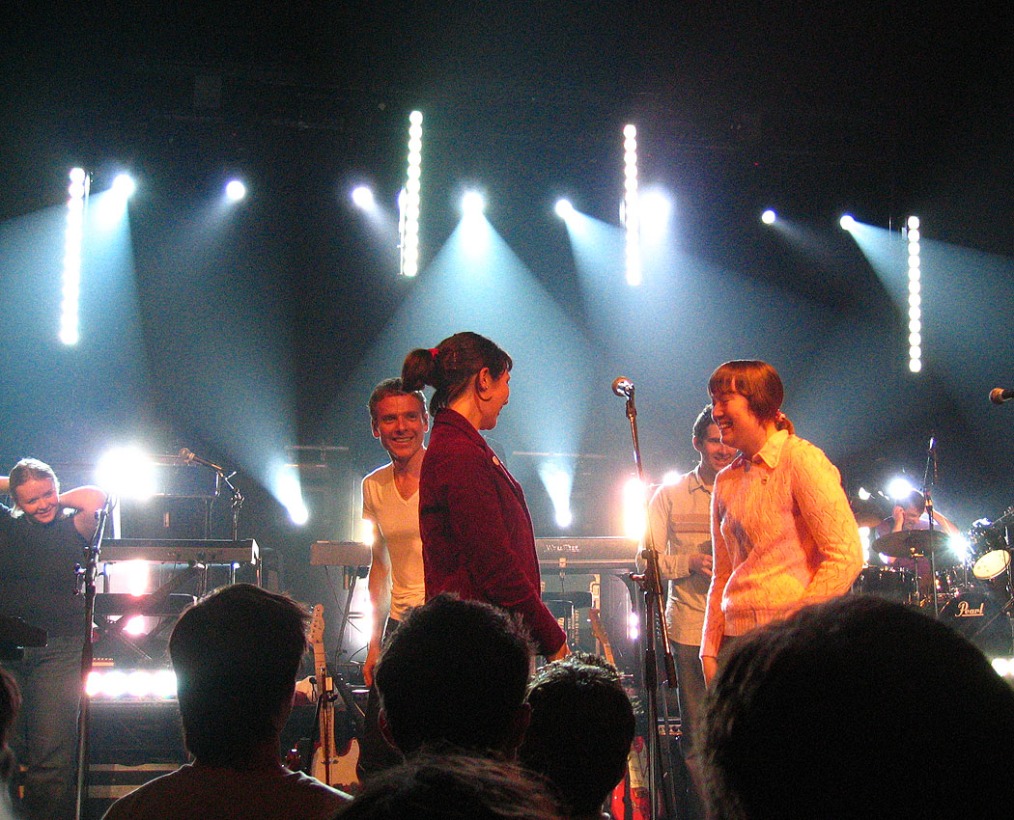 AN INTRODUCTION TO DEE

The next time Belle & Sebastian played in Brisbane I made another t-shirt, but this time just for me to wear. It said, “I got thrush from licking railings” — with a picture of a fence. One very, very beautiful woman complimented me while we were alone at the bar. I almost fell over with pride and absolute terror that someone so hot was talking to me. I just smiled and walked away with my drink being too shy to talk to her.

The shirt itself was lost to time, but here is the design file I kept. The song it refers to a line from this song

And I say all that above because my most dearest Dee was in the same room at the very same time, for THE very first time — and I had no idea, and she had no idea either.

And this was my very first introduction to her despite the fact we didn’t meet or even make visual contact and she would only know I existed much, much later.

It was my 18th birthday and, because the universe hated me, I had a uni exam at 5:45pm that afternoon. Just before I went into the exam, I got a text from Laura K or Jess saying they had just been speaking to the band. Being in my petulant late-teenage years, I was jealous-angry as I filed into the UQ Centre instead of lining up to see B&S. I later arrived at the Tivoli, proudly brandishing my ID for the very first time, and got a ‘happy birthday’ from the security guard. When I joined my lovely friends up the front, I was (not proud to say) wearing my best bitch-face, and continued to do so for a while. Later in B&S’s set, Stuart announced that they were going to sing a special song and suddenly one of my favourite bands was leading the crowd in wishing me happy birthday – all orchestrated by my amazing friends, of course! What pals. I definitely could have done worse.

Meanwhile I was up the back thinking, “Who is this goob ‘Dee’ getting all this special treatment – Birthday- Smirthdays. Ugh. Get on with the show ffs!”

After all this it should be said I was appalled by Belle & Sebastian’s new direction. So cheesy and uninspiring. And so their last album is absolute shite. Worse than evil. They are now dead to me. Full circle.