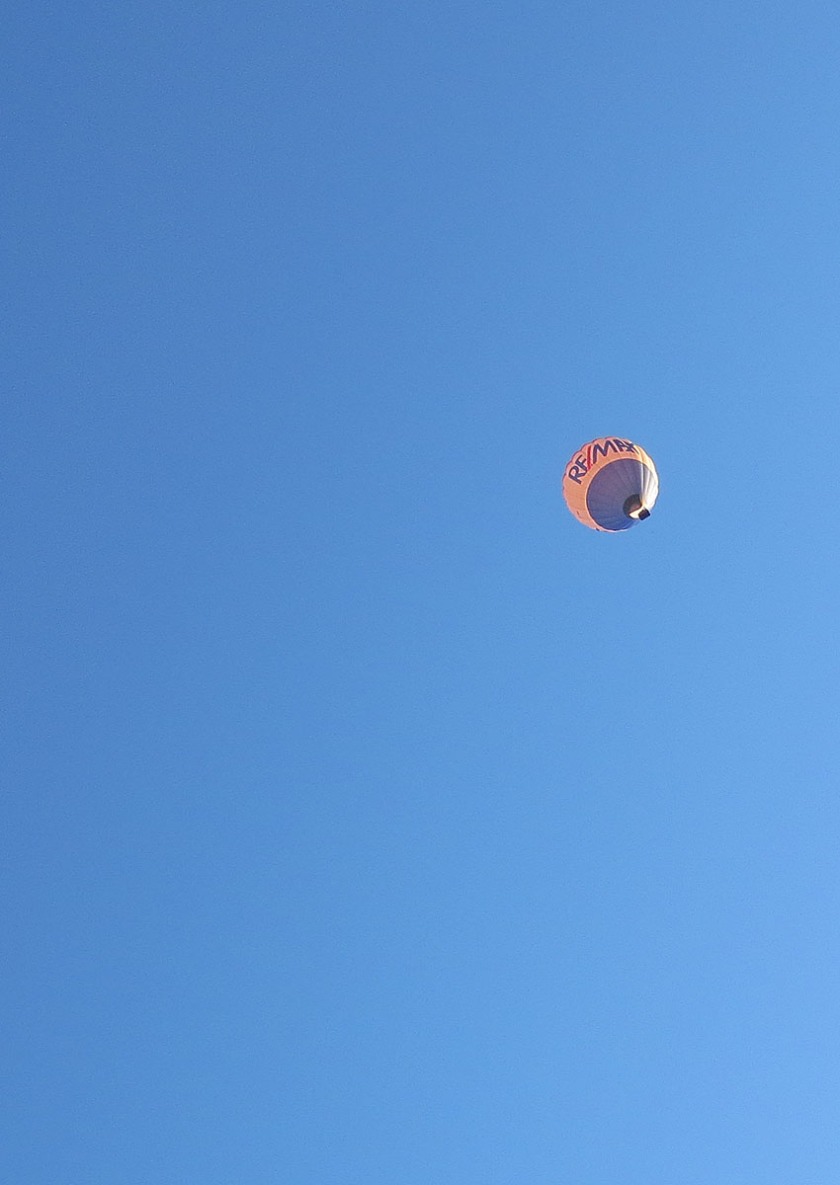 I got up so early today I got to see a bunch of Hot Air Balloons as I left for work. It was quite ironic seeing these bad-boys because a big part of my day today involved the logistical nightmare of inflating and deflating a fucking huge balloon at a major public event. (More on this later.)

The event in question was a rally outside Parliament to protest against the excessive job cuts the new LNP government had just implemented. It has been so maddeningly evil. I have heard first hand about weeping in offices when suddenly at least 3000 temporary workers in Queensland’s public service were dismissed. Endless farewell morning teas and dark, dark moods as everyone else wonders what will come next. 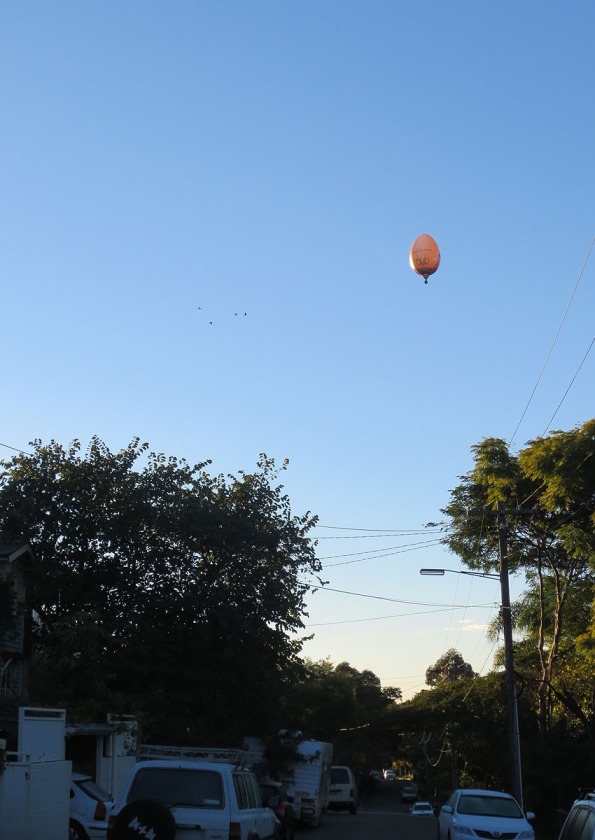 After doing almost a day’s worth of design work as frantically as possible in 3 hours, I then was ferried off to Rocklea to pick up a hire van. The purpose of which was to transport the half inflated balloon to the rally at Parliament House.

Of course I managed to make a total fool of myself in the process. Upon receiving the keys to the van I got in and tried to get moving but couldn’t get it to budge. It seemed to want to move but nothing worked. I tried turning the machine off and on and after about a minute and a half I realised I was trying to employ the brake pedal as an accelerator. I surprise myself with my stupidity sometimes. Really.

Anyway, back at work in the carpark I put the balloon in the van and inflated it as much as possible so we didn’t need to rely on the generator we had hired for the stage/sound/video stuff. 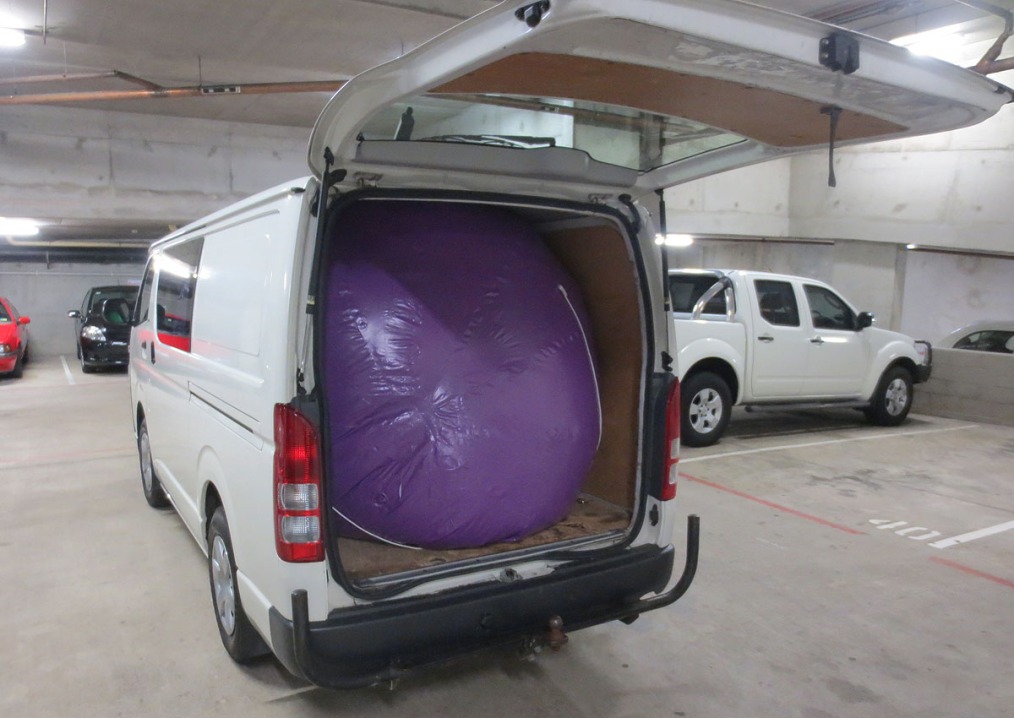 At Parliament House at 3pm I dropped off Jon, the quarter-filled balloon, the helium bottle, the ‘little beaver’ air-compressor and some of our campaign bags. I stayed as long as I could but inevitably Jon had to wait there like a goob for ages, guarding our little sample bags and weathering all the perplexed looks from the endless passer-bys as he stood pressed up against a half inflated purple “growth”. 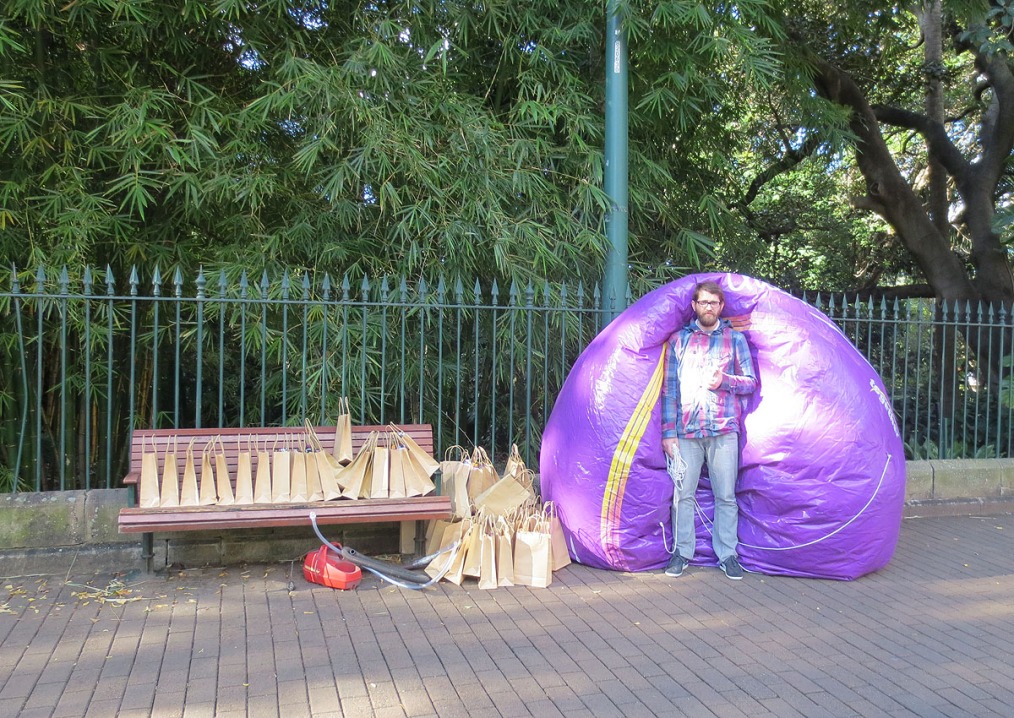 So I dropped the van back at the office and walked as quickly as I could back over. 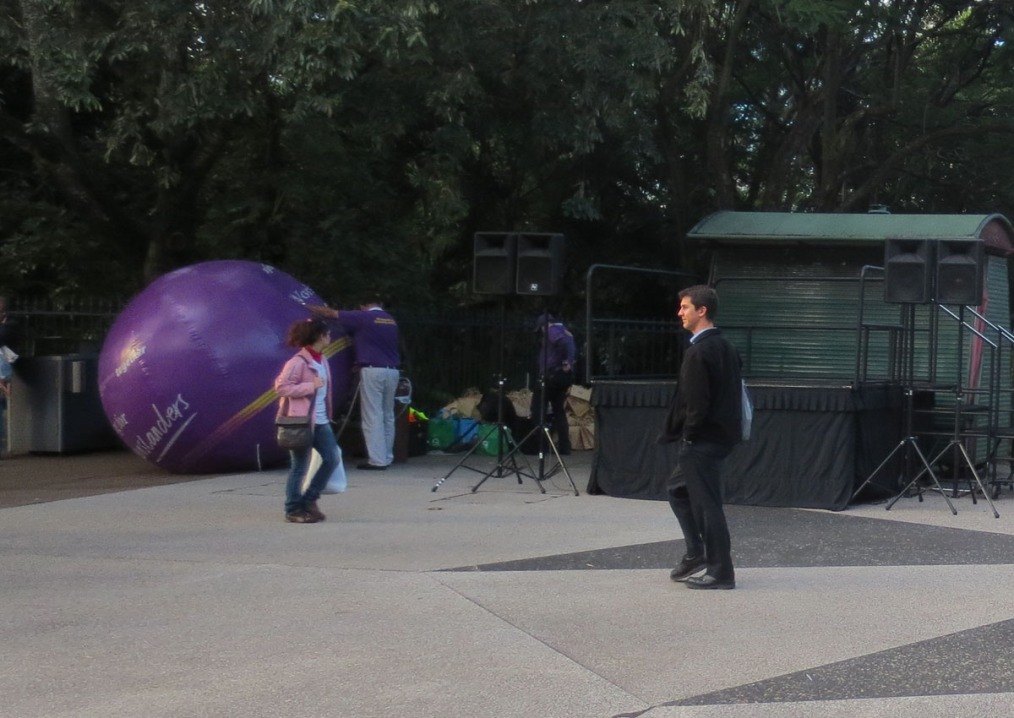 We then filled the balloon with air but when Des arrived we started trying to fill it with some helium. We managed to get it about 2/5s filled before the helium ran out. This was enough to make it almost weightless, but not quite float. 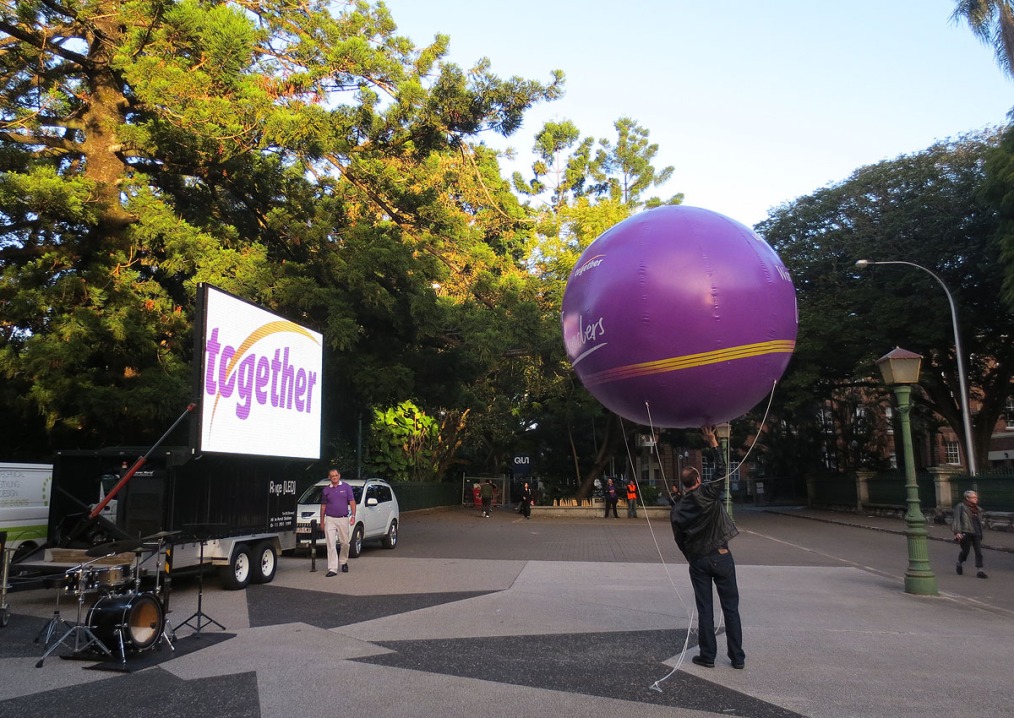 We spent from 4 to 5pm just mucking around with the balloon but just after 5pm people started arriving. It was meant to be an after-work event and dutifully our public sector workers did their jobs and then came to the rally. And in the space of 15 minutes the place just got insane. It was so PACKED. I have been to many rallies here but this was the biggest by at least 10-fold. 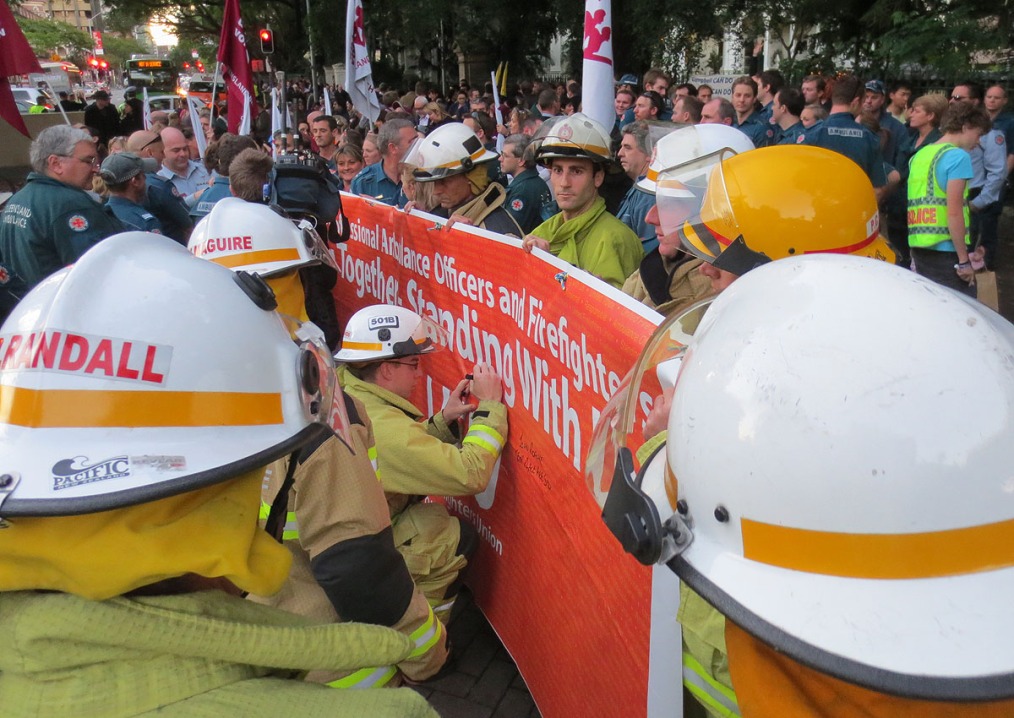 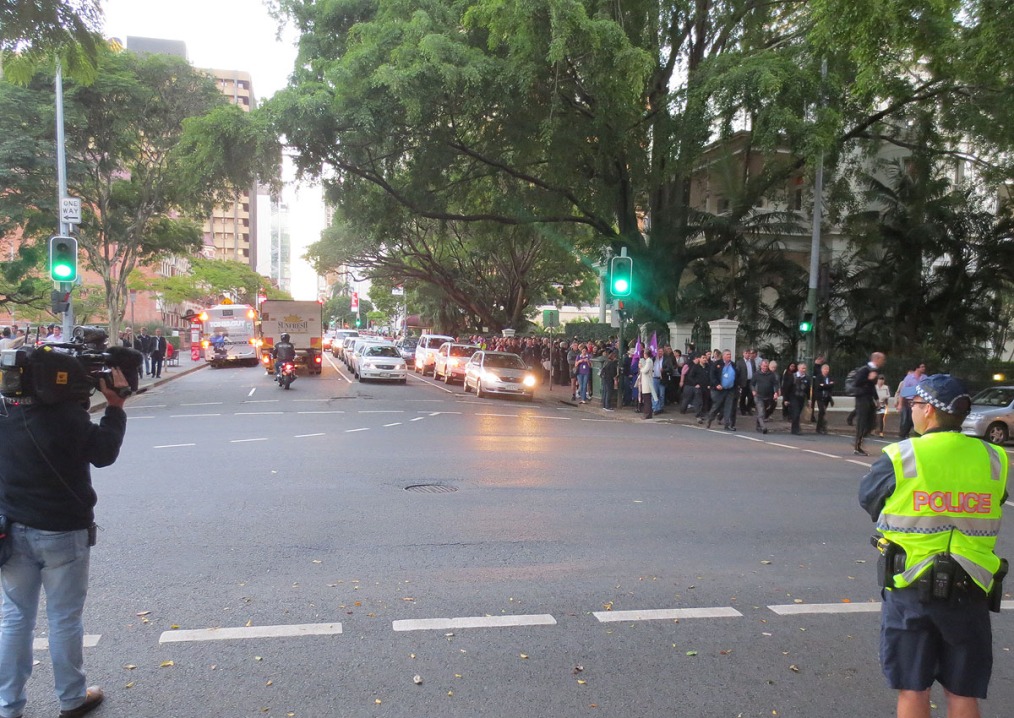 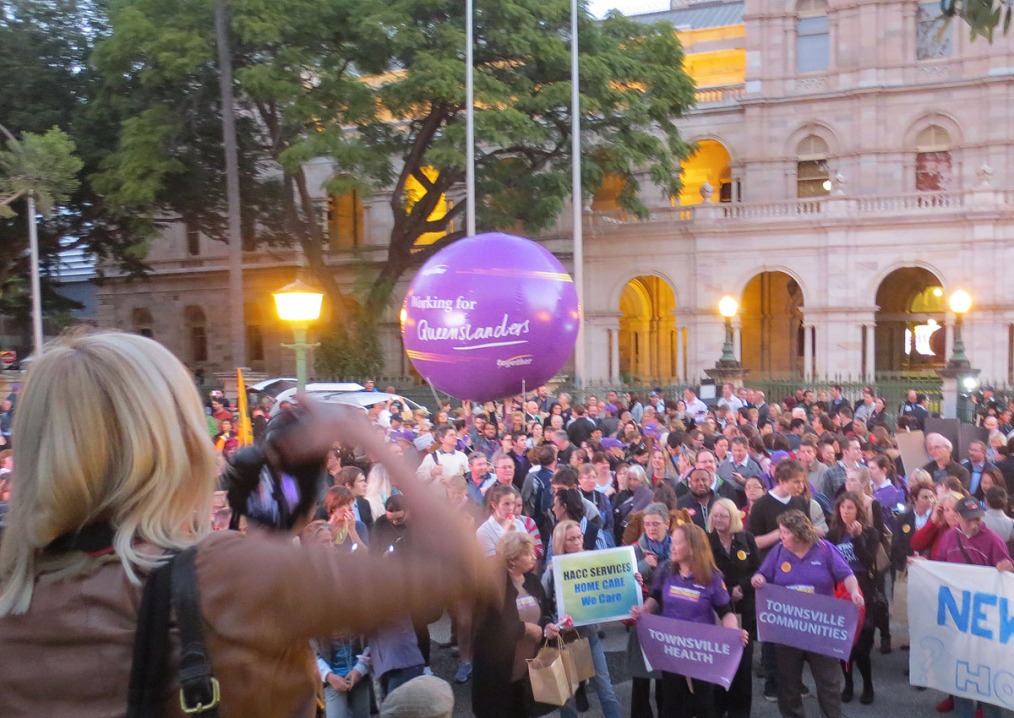 I had forgot to tell Sarah, our photographer (pictured above), how EPIC tonight would be. She was losing her shit but was also thoroughly up to the task. 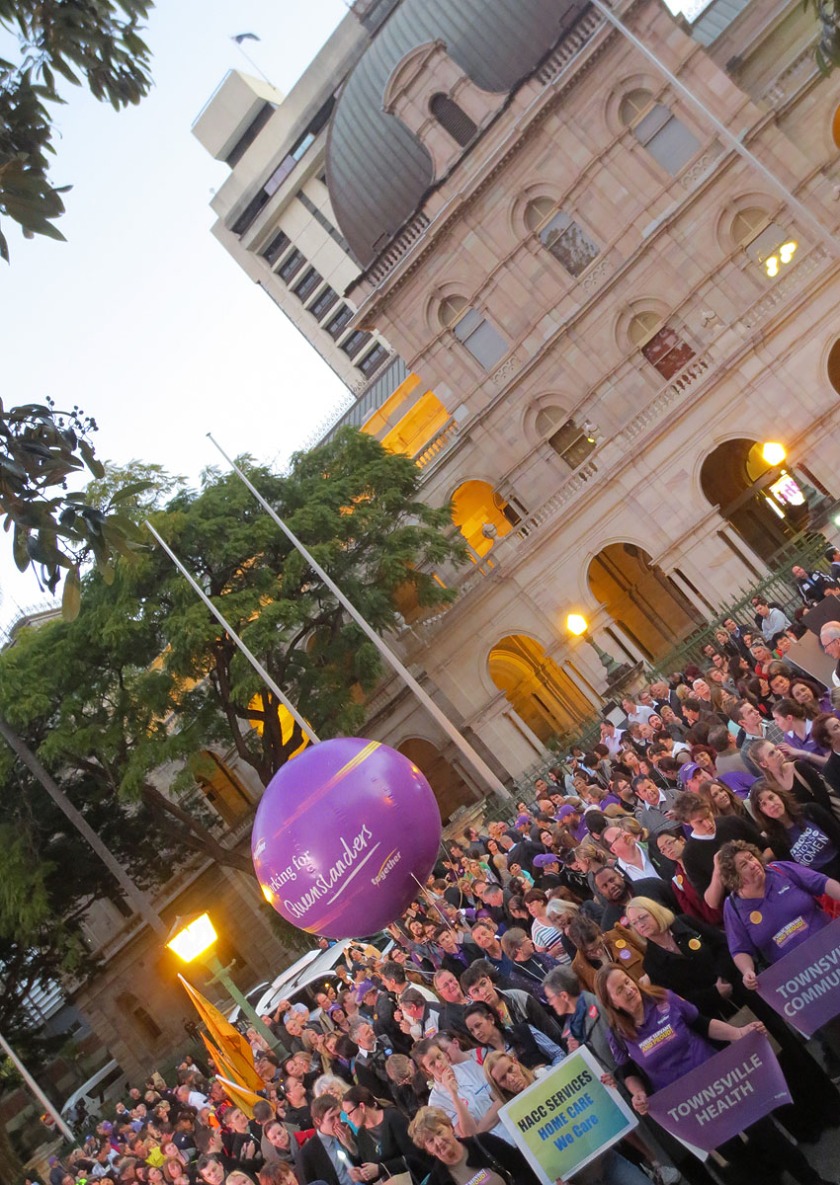 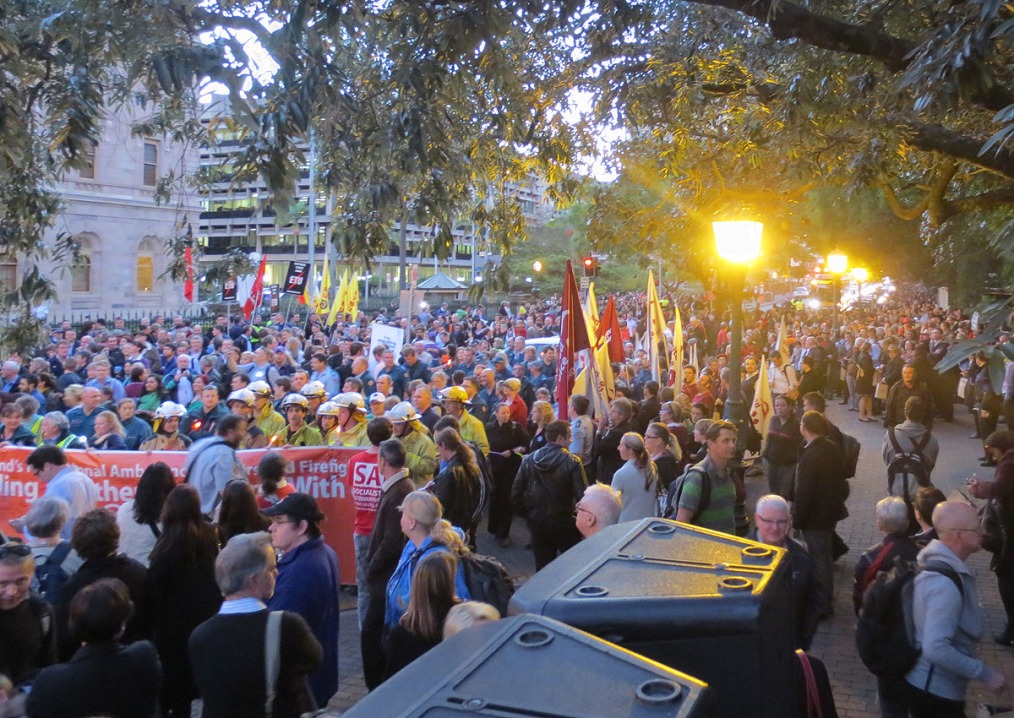 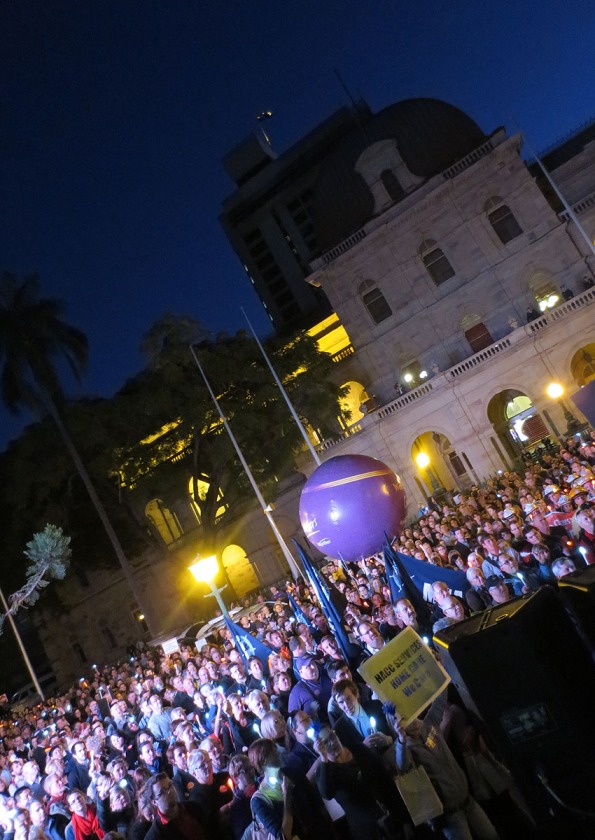 Ok. so we had these electric candles to mourn all the job losses. Just quietly I came up with the candle idea, but was only partially responsible for deciding on the electric version. So I sourced them and although I expected them to be a bit pathetic — in fact they looked amazing. Like, really, really amazing. The sight of thousands and thousands of these candles held aloft in respect, or just waving around in support, was simply epic. And I know I use this “epic” term quite loosely, but in this context I have to admit I have never seen anything like it. Wow. I could describe it as INSPIRED but it was just a bit of a beautiful, but poetic, accident. Real candles would have looked so sombre and have been quite unweildy. Electric candles meanwhile were waved, shaken, turned off and on, and held aloft without any drama. And the red and white versions just looked so interesting and wonderous.

At this point I had left the balloon in the capable hands of Jon, Tim, Em, Bri and Steve and taken up a position behind the stage to guide Sarah in the photography. But then I saw how amazing this all looked and I remembered there was an overflow of candles.

So I spent at least 20 minutes running around the crowd with a coles-bag handing out the left-overs and I had people swarming over me in an effort to grab one. I felt like Santa. 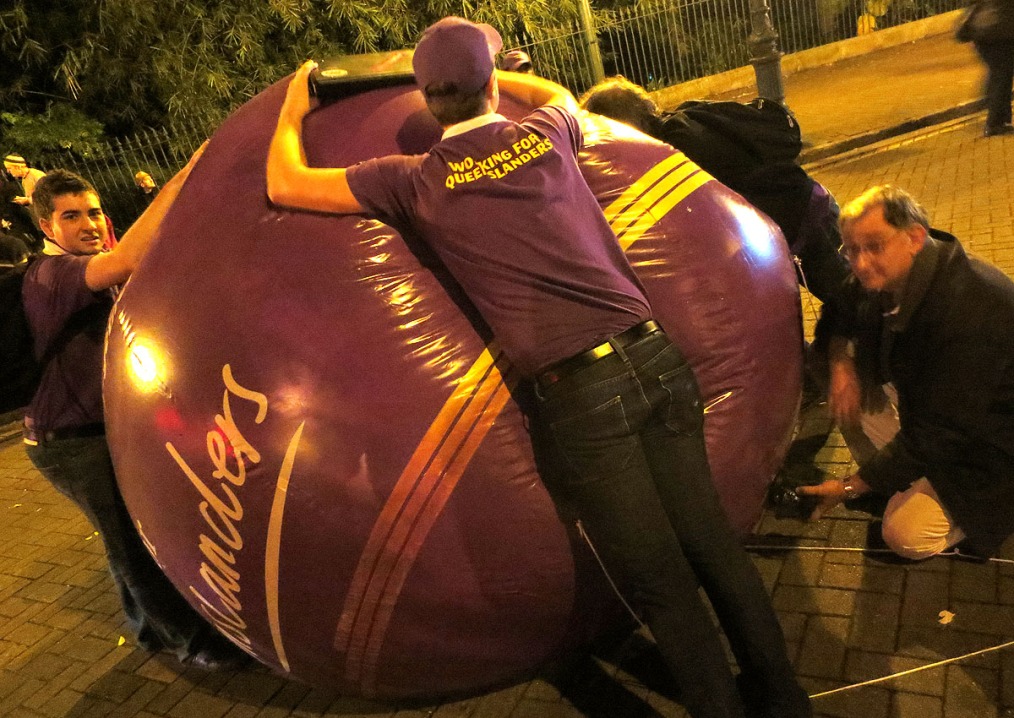 Deflating the balloon proved to be quite a torment. I knew this would happened from the test run we had done a week ago, but I had no choice but live with that seeing as so much other stuff to make the event happen came first — what happened next was just one of those bridges we needed to cross then.

After 20 minutes of us trying smashing against the structure, Sean jumping on top, and Des using a mini-battery-powered-vaccuum we gave up and decided to walk the balloon the 3 km back to the office carpark. 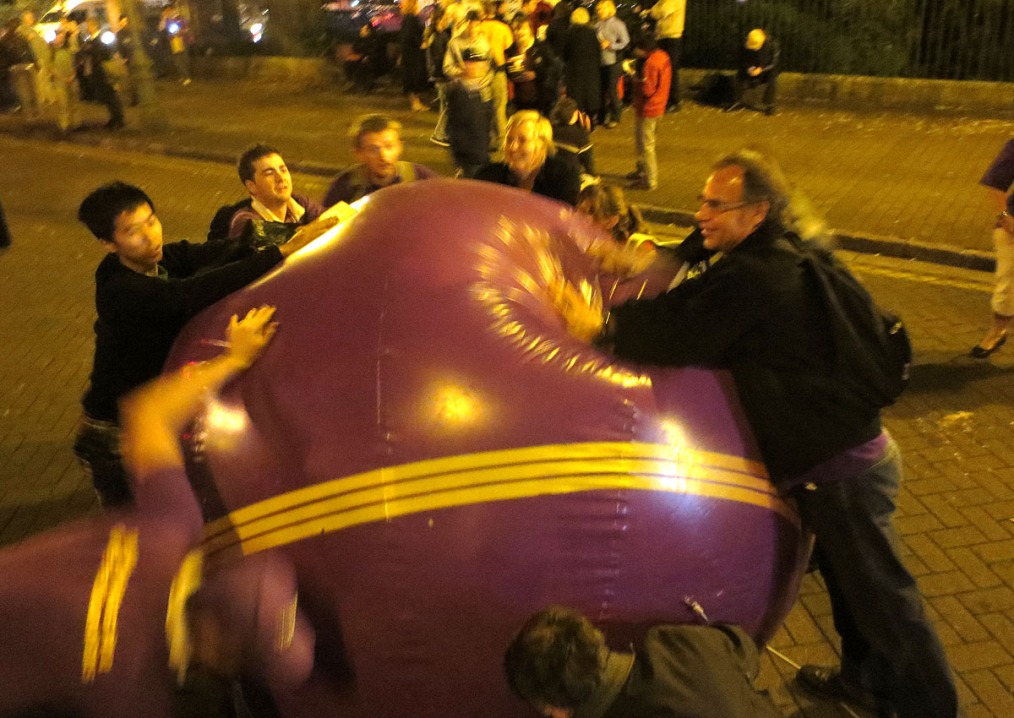 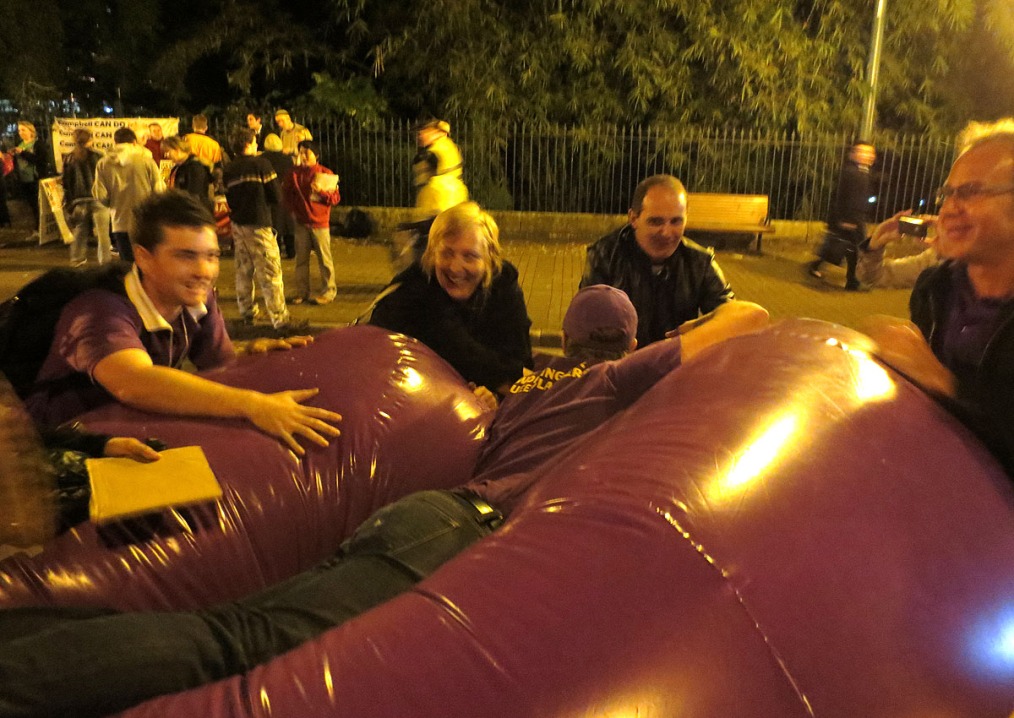 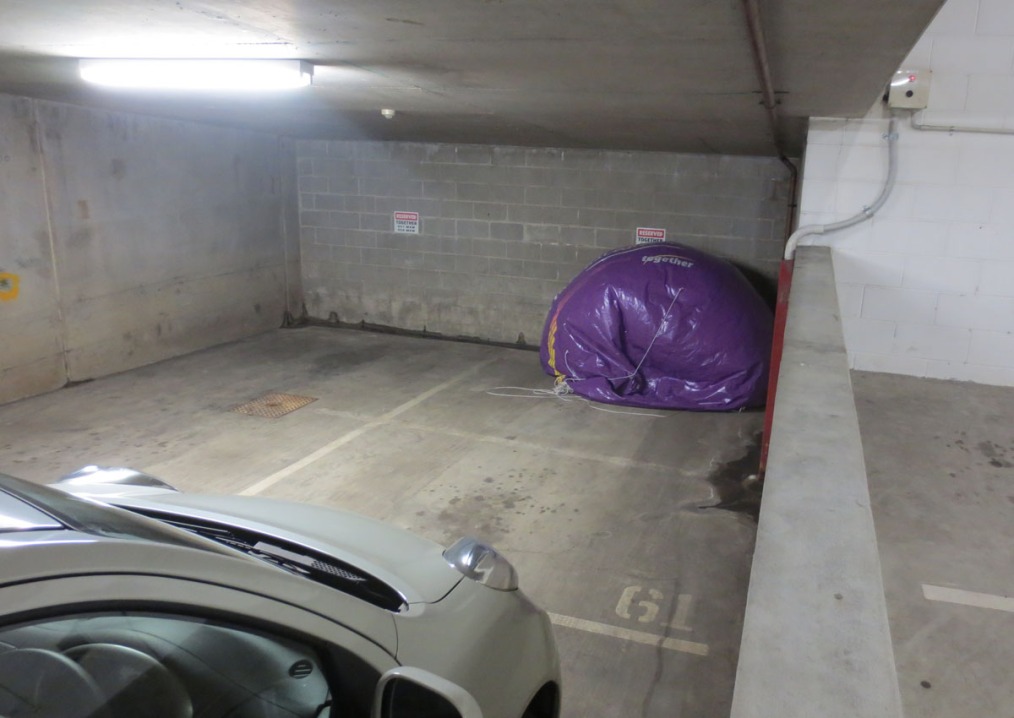 And together we got the bad-boy home. We got some amazing “WTF” looks from everyone around. I doubt it will be totally deflated by the time I get to work tomorrow.