So this is by one of my super-cool ginga homegrrls. (I can’t believe she likes water so much!) 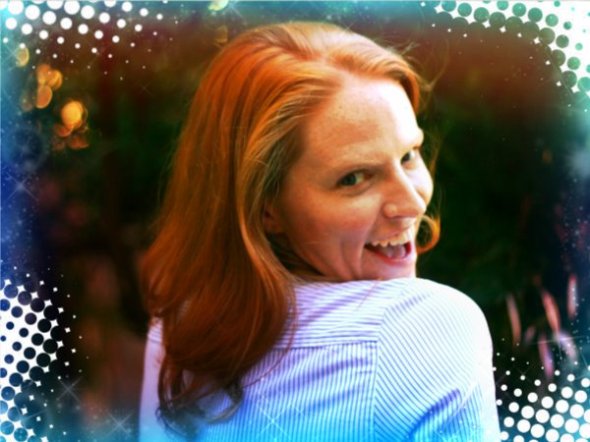 My name is Lara and I’m addicted to swimming.  I’m also bookish, of slight build and… a ginger.  I like cups o’ tea and romance novels. Probably not your average go-to image of an ocean swimmer.

And yet I love ocean swimming and was down right excited about taking part in a 2.4km ocean swim this past March in the crystal clear, calm, azure waters of Moreton Bay.

If you’ve never visited Moreton Island and stayed at Tangalooma – do yourself a favour and get on that!  It’s a subtropical island paradise 35km from down town Brissy.  It’s like being on the set of Fantasy Island, complete with staff in Hawaiian shirts who deliver you to your lodgings in a golf buggy! It’s excellently bizarre and a dream like setting for a nice big ocean swim.

As luck or Murphy’s Law would have it though, on the morning of the swim our beautiful Moreton Bay was less than calm and azure.  It was dark, choppy, the current we would be swimming against was strong and the course was full of “Moon” jellyfish.  Moon jellyfish aren’t deadly (unless of course you have an allergy) but they are unpleasant and the tentacles do sting a bit so I figured I’d just do my best to dodge them and wack them outta my way as required.

My “race strategy” was to hang back a bit and take it pretty slow as I had a dicky shoulder.  I was glad I did.  As I fell behind the white water of the “splash-a-ton” (my swimming buddy and I made that word up) and my visibility cleared I realised I was swimming into a “bloom” of jellyfish.

I had to think quick – should I try to swim straight through it as fast as I could or go around the bloom, which would add time and distance but I’d suffer less pain?  I looked again at the wall of jellyfish – I had no idea how wide it was.  I had an inkling that if I tried to swim through that dense cloud of stinging jelly I’d end up like Nemo’s BFF Dory. I looked up and ahead and sure enough a group of people who had swum into the worst of the jellyfish were screaming and being rescued by the Coast Guard.

The psychological terror and physical agony was pretty evident.  Not a good look.  For some reason I thought about the $50 registration I’d paid to take part in the event and that was that – decision made.  I was going to swim around the worst of it, get outta this choppy swell and get back to having a fully awesome time thank you – no jellyfish was going to rain on my parade! So off I went, swimming out wide past the Coast Guard and doing my darndest to avoid the faceless blue blobs.

Somewhere in the final kilometre the sun came out and all of a sudden I was once again in the warm, calm, azure (but still a bit stingy) waters of Moreton Bay having a really good time!

When I crossed the finish line I was ecstatic.  I’d been in the water just over an hour and I actually ran up the sand to the finish line.  This is a less than glamorous picture of me legging it up the beach – I think my face says it all.

At the end of the race I stood around with the other entrants clasping plastic bags of ice to our jellyfish welts, munching on slices of watermelon and looking across the beautiful bay to the Glasshouse Mountains.

It doesn’t get much better than that.

I don’t mind the Olympics. I don’t mark it down in my calendar or tune any part of my life in its direction, but I do appreciate it’s drama and newsworthiness.

But there are a few things that annoy and perplex me. (Apart from its disgusting BUSINESS side).

And swimming is chief amongst the things that grate me for being both annoying AND perplexing. The annoyance of swimming is begins with the fact our TV feed of the Olympics is ridiculously skewed to swimming events. I have learnt to live with this but in doing so it has been just a tiny bit satisfying these Games to see us doing so badly in the pool and these trumped-up “heroes” just being quite ordinary. And then these “heroes” confronted with this pedestrianism just melt and start weeping like babies.

But crucially — the PERPLEXING part is to do with the fact I thought the Olympic’s motto was “Faster, Higher, Stronger”.

And so it makes no sense to me why swimming has FOUR disciplines — THREE of which are retardations of the process of swimming — and consequently, very opposite to the Olympics Motto. Breast-stroke, Butterfly and Back-stroke are processes that are redundant and contrary to any Olympic ideal. They are deliberately inefficient, deliberately slower, and well, just deliberately self-indulgent.

I was talking to some friends about this today and the only other sport we could think of that acted this way was ‘walking’ (which in itself is an absolute joke) and the ‘triple jump’ and maybe ‘shot put’.

See the Olympics, I believe, was established upon the focus of testing military skills. It’s raison d’etre was warfare training or replicating conditions involved in ancient battles. Even modern day team sports are essentially replications of ancient scrimmages. Most team sports like rugby and soccer and gridiron, or whatever, are about possession of territory – just like war.

So any Olympic event that doesn’t involve skills that could be replicated in ancient (or modern) warfare is stupid in my opinion.

PS Beach Volley Ball just might be in that stupid category too.

I might have been too hard on breast-stroke. It has a definite military application in the sense that it is the quietest form of swimming and thus would be appealing to anyone sneaking up on an enemy or those trying to allude.

Also – the “court sports” like Tennis and Badminton are similarly without any military application. They are also just useless cause they are the privilege of anyone with money. These are sports you cannot indulge in unless you have funds. Even basketball requires a net and hard flooring.